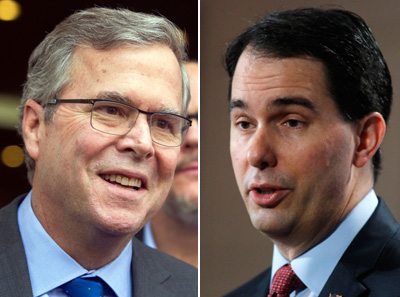 Jeb Bush may project a warmer, fuzzier, less hardnosed conservatism than Scott Walker, but is there really much difference between them? Greg Sargent isn’t so sure:

Here’s what I’ll be watching: How will this basic underlying difference, if it is real, manifest itself in actual policy terms? On immigration…both support eventual legalization only after the border is secured. Will their very real tonal difference show up in real policy differences?

On inequality, Walker may employ harsher rhetoric about the safety net than Bush does, but the evidence suggests that both are animated by the underlying worldview that one of the primary problems in American life is that we have too much government-engineered downward redistribution of wealth….Will Walker and Bush differentiate themselves from one another in economic policy terms in the least?

The important thing is not assuming Bush and Walker represent anything new or different from each other just because they offer different theories of electability and different ways of talking to swing and base voters. Much of what has characterized all the recent intra-party “fights” within the GOP has reflected arguments over strategy and tactics rather than ideology and goals. I’d say there is a rebuttable presumption that will continue into the 2016 presidential contest.

You’d think that the way to get a grip on this question would be to look at the 2000 election. Jeb’s brother, George W. Bush, ran as a “compassionate conservative,” and during the campaign he even made good on that. Remember his criticism of a Republican proposal regarding the EITC: “I don’t think they ought to be balancing their budget on the backs of the poor”? Compassionate!

So how did that work out? Well, that’s the funny thing: it’s hard to say. Liberals tend to see Bush as a hardline conservative, but that’s mainly because of the Iraq War and Karl Rove’s hardball electoral tactics, which drove us crazy. Conservatives, by contrast, don’t believe he was really all that conservative at all. And I think they have a point. In fact, I made that case myself way back in 2006 in a review of Bruce Bartlett’s Imposter:

Don’t believe it? Consider Bartlett’s review of Bush’s major domestic legislative accomplishments. He teamed up with Ted Kennedy to pass the No Child Left Behind Act, which increased education spending by over $20 billion and legislated a massive new federal intrusion into local schools. He co-opted Joe Lieberman’s proposal to create a gigantic new federal bureaucracy, the Department of Homeland Security. He has mostly abandoned free trade in favor of a hodgepodge of interest-group-pleasing tariffs. And after initially opposing it, Bush signed the Sarbanes-Oxley bill with almost pathetic eagerness in the wake of the Enron debacle, putting in place a phonebook-sized stack of new business regulations.

Want more? He signed the McCain-Feingold campaign finance bill, a bête noir of conservatives for years. His Medicare prescription-drug bill was the biggest new entitlement program since the Great Society. He initially put a hold on a wide range of last-minute executive orders from the Clinton administration, but after a few months of “study” allowed nearly all of them to stand. And he has increased domestic discretionary spending at a higher rate than any president since LBJ.

Obviously there’s more to Bush’s record than this—tax cuts, judicial appointments, the Iraq War, etc.—and he certainly counts as a conservative when you look at his entire tenure in office. The question is whether there’s a difference between his brand of conservatism and, say, Scott Walker’s or Ted Cruz’s. I’d say there is, and that there’s probably also a difference between Jeb Bush’s brand of conservatism and the harder-line folks represented by Walker, Cruz, Santorum, and others. Tonal shifts and tactical choices often turn into real differences in who gets appointed to various cabinet positions and which priorities a new president will set. Jeb Bush is obviously no liberal. But would he govern differently than Scott Walker? My guess is that he would.