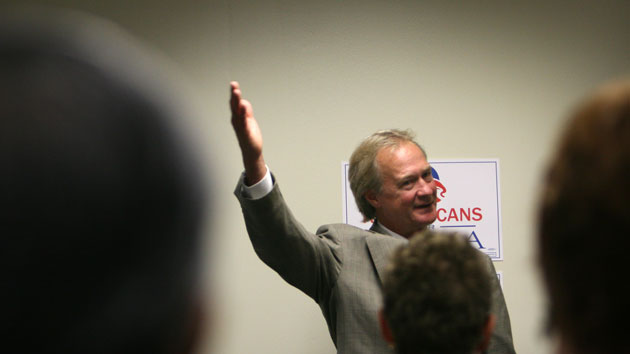 Chafee said the launch of his exploratory committee will be made via videos posted on his website, Chafee2016.com.

“Throughout my career, I exercised good judgment on a wide range of high-pressure decisions, decisions that require level-headedness and careful foresight,” said Chafee. “Often these decisions came in the face of political adversity. During the next weeks and months I look forward to sharing with you my thoughts about the future of our great country.”

Lincoln Chafee, of the Rhode Island Chafees, won’t be the next president, although he does enter the Democratic primary with strong name recognition among people who use “summer” as a verb. Chafee’s father, great-great grandfather, and great-great uncle all previously served as governor of the state. Lincoln ran for the family seat only after losing his spot in the Senate in 2006 to Sheldon Whitehouse (of the Rhode Island Whitehouses), whose father had roomed with Chafee’s father at some college in New Haven before entering the diplomatic corps (like his father before him).

But there is something worth highlighting in his announcement interview:

Chafee said his focus will be on building a strong middle class coupled with environmental stewardship. Chafee, who voted against former President George W. Bush’s Iraq War, noted that Mrs. Clinton voted for it. He said he aims to send a clear message that “unilateral military intervention has damaged American interests around the world.”

Did you catch that? It’s easy to forget now that she’s the email-destroying, dictator-courting villain of Benghazi, but there was a time when Hillary Clinton’s biggest weakness was something else entirely: Iraq. Clinton’s support for that war (and her inability to assuage its opponents) was the fuel for Sen. Barack Obama’s rise in the polls in 2007. Eight years later, the issue has been all but erased from the political debate.

Don’t bet on Chafee being the man who brings it back.