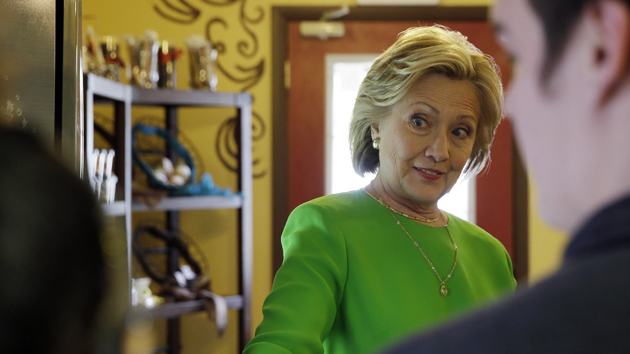 How do you go about redefining Hillary Clinton? As one of the most well-known political figures in modern history, just about everyone in America already has a opinion of her.

After months in the lab and out in the field polling voters and testing messages, Republicans believe they have the answer they need to help prevent another four years of a Democratic presidency. As Politico reports today, the GOP plans to depict Clinton as an out-of-touch one-percenter, who doesn’t drive her own car or pump her own gas, who owns multiple large houses and commanded a six-figure fee for her pre-campaign speaking gigs, who can’t grasp the daily life of a working-class family. As Politico‘s Eli Stokols puts it, the GOP plans to “Mitt Romnify” Clinton:

The out-of-touch plutocrat template is a familiar one: Democrats used it to devastating effect against Republican Mitt Romney in 2012. While Hillary Clinton’s residences in New York and Washington may not have car elevators, there’s still a lengthy trail of paid speeches, tone-deaf statements about the family finances, and questions about Clinton family foundation fundraising practices that will serve as cornerstones of the anti-Clinton messaging effort.

“She’s admitted she hasn’t driven a car for decades; she probably doesn’t ever go into a coffee shop and talk to regular people unless it’s for a staged photo-op,” said American Crossroads CEO Steven Law, alluding to Clinton’s portrayal in her campaign’s launch video on Sunday. “She really has lived the life of a 1-percenter these last several years, and it shows.

“We know her team is working to rebrand her as a relatable, regular person; the question is, can she actually perform in a way that convinces people she is that person? We think that’s going to be hard for her.”

The outlines of the effort to Mitt Romnify Hillary Clinton are still being sketched. Crossroads, the super PAC that spent $70 million in 2012 mostly on television ads attacking President Barack Obama, is in the middle of an extensive research project analyzing voters’ existing perceptions of Clinton and their reactions to a number of potential critiques. But the Republican National Committee has done focus groups that suggest Clinton is more vulnerable to charges of being imperious and bending the rules than anything else tested against her.

“The most potent message against Clinton is that she doesn’t live an average life, she’s out of touch and doesn’t play by the same set of rules,” said the RNC’s research director, Raj Shah. “[T]hat resonates more deeply than some of the policy hits, the ethical hits.”

Soon after Stokols’ story was published, Crossroads GPS, the GOP establishment’s leading dark-money group, released its own polling data from 15 battleground states highlighting what it called Clinton’s “major hurdles.” Based on a poll of one thousand likely voters conducted in late March, Crossroads found that 95 percent of respondents had a fully formed opinion of Clinton; her popularity was evenly split, with 49 percent favoring her and 46 percent opposing. Crossroads also claims that some of the “most potent concerns” voiced by respondents were Clinton’s “record of scandals” at the State Department, as well as doubts that the former first lady “is honest and trustworthy.”

The data here aren’t that surprising—after all, this was a poll commissioned by a Republican shop. But what caught my eye was Crossroads founder Steven Law’s statement in the press release accompanying his group’s findings: “A staged van tour,” he said, “can’t erase the legacy of scandals and luxury lifestyle that are ingrained in Americans’ view of who Hillary really is.” Right there Law shows his hand—luxury lifestyle. That’s on top of his “one-percenter” jab to Politico.

In other words, get ready for 18 months of ominous, grimly narrated attack ads about out-of-touch plutocrats and the lifestyles of the rich and politically famous. Except this time the target isn’t Mitt Romney; it’s Clinton, the Democrat trying to run as the “champion” of “everyday Americans.”