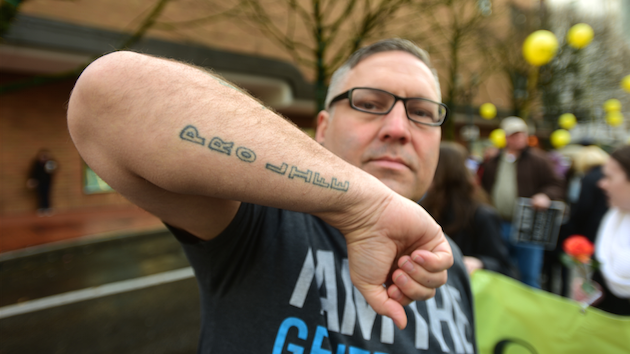 An abortion protester shows off his pro-life tattoo, because Portland.Alex Milan Tracy/AP

Here’s how quickly the prospect of expanding abortion rights can kill a piece of legislation: In February, a group of state lawmakers introduced a bill that would require insurers to cover the full spectrum of women’s reproductive services at an affordable price. Just two months later, the same lawmakers have killed the bill. The section calling for abortion coverage proved just too controversial.

This didn’t happen in the Rust Belt, or in a purple state where Democrats hold the statehouse by just a vote or two. It happened in Oregon, where the Democrats control both chambers of the legislature by a supermajority and where the party has a lengthy history of going to the mat for abortion rights.

Nina Liss-Schultz of RH Reality Check (and a MoJo alum) has the full story. The tale is an illuminating one as progressives contemplate how to respond to the historic number of anti-abortion laws that have passed in the last five years.

Conservatives have enacted more abortion restrictions in the past few years than they have in the entire previous decade. In January, though, several news reports circulated that made it seem as though a full-fledged progressive counter strike was already under way. The stories were based on reports by the Guttmacher Institute and the National Institute for Reproductive Health, pro abortion-rights think tanks. They found that in 2014, dozens of lawmakers introduced dozens of bills—95, by Guttmacher’s count—supporting women’s reproductive rights, surpassing a record set in 1990. “A Record Number Of Lawmakers Are Starting To Fight For Reproductive Rights,” one headline announced. Another read, “Inside the quiet, state-level push to expand abortion rights.”

It’s certainly true that the tidal wave of new abortion restrictions has inspired a progressive backlash. But the suggestion that the two sides are evenly matched, or even approaching that point, is out of line with reality. Just four of those 95 measures were eventually passed into law. One of them was a Vermont bill to repeal the state’s long-defunct abortion ban, in case the makeup of the Supreme Court allowed the justices to overturn Roe v. Wade—a looming danger, but not the most pressing issue facing abortion rights.

By contrast, last year alone conservative lawmakers introduced 335 bills targeting abortion access; 26 passed. And in two states that are overtly hostile to abortion rights—Texas and North Dakota—the legislature wasn’t even in session. That’s part of why you can expect this year’s abortion battles to be even uglier.

But it’s not just about sheer numbers. At the same time that progressive lawmakers were pushing forward-thinking laws, the 2014 midterms undermined their efforts. In states where there were serious efforts to expand reproductive rights—Colorado, Nevada, New York, and Washington—Democratic losses on Election Day have placed those plans on indefinite hold.

Here’s how things fell apart in Oregon, according to the Lund Report, an Oregon-based health news website.

[Democratic health committee chair Sen. Laurie] Monnes Anderson said the abortion language was so toxic that “leadership”—her caucus leaders—would not even allow her to have a public hearing on SB 894, let alone move it to the Senate floor. She said House Democratic leaders were also involved in the discussion over whether the bill could see the light of day.

Meanwhile, in the time it took for Oregon to abandon this bill, Arizona, Arkansas, Idaho, Indiana, and West Virginia passed 10 new abortion and reproductive rights restrictions. What happened in Oregon shows just how much reproductive rights advocates are playing catch-up, even in states that appear friendly to their agenda.