Back when Egypt started bombing Libya and Saudi Arabia started bombing Yemen, American conservatives were jubilant. That’s the kind of swift, decisive action Barack Obama ought to be taking against our enemies in the Mideast. Never mind that this already was the kind of action he had taken. It didn’t really count because he had been too slow to ramp up attacks and had demonstrated too little bloodthirstiness in his announcements. Did he really want to “destroy” ISIS or 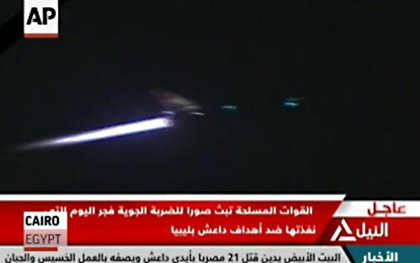 merely “degrade” it? Dammit man, make up your mind!

This weekend, though, the LA Times reminded us that regardless of who’s doing it, air strikes alone simply have a limited effectiveness in wars like this:

Officials in Saudi Arabia, the region’s Sunni Muslim power, say the air campaign is dealing a decisive blow against the Houthis, whom they view as tools of aggression used by Shiite Muslim-led Iran in an expanding proxy war….However, residents say the strikes have done little to reverse the territorial gains of the insurgents and restore exiled President Abdu Rabu Mansour Hadi to power in the quickly fragmenting country.

….Security experts question whether the coalition can achieve its goals through airstrikes alone. Saudi officials have not ruled out sending in tanks, artillery and other ground forces massed along the frontier. But Saudi leaders appear wary of such a move against the Houthis, hardened guerrillas who belong to an offshoot of Shiite Islam known as Zaidism.

The last time the Saudis fought the Houthis in the rugged mountains of northern Yemen, in 2009, more than 100 of their men were killed. Pakistan’s parliament voted Friday to stay out of the conflict, a blow to the Saudis, who had reportedly asked the country to send troops, fighter jets and warships.

“This [war] will turn Yemen into Saudi Arabia’s Vietnam,” said Mohammed al-Kibsi, a veteran journalist and commentator in Yemen’s capital, Sana, where the Houthis seized control in September.

Air strikes are useful components of a wider war. But to the extent anyone can truly win these conflicts in the first place, it’s going to take ground troops. Lots and lots of well-trained, well-equipped, and well-motivated ground troops. Saudi Arabia is “wary” of committing ground troops in Yemen and Pakistan is staying out. In Iraq, it’s still a big question whether the Iraqi army is up to the task. And to state the obvious, even among America’s most bellicose hawks, there’s no real appetite for sending in US ground troops.1

This is just the way it is, and everyone knows it. Air strikes can do a bit of damage here and there, and they can serve as symbolic demonstrations of will. But none of these conflicts—not in Yemen, not in Iraq, not in Syria, and not in Libya—are going to be affected much by air campaigns alone. They need ground troops. If you loudly insist that Obama is a weakling as commander-in-chief but you’re not willing to commit to that, you’re just playing political games.

1And don’t fall for the “special ops” ploy. Politicians who want to sound tough but don’t want to ruin their careers by suggesting we deploy a hundred thousand troops in Iraq again, are fond of suggesting that we just need a bit of targeted help on the ground from special ops. This is clueless nonsense meant to con the rubes, but nothing more.