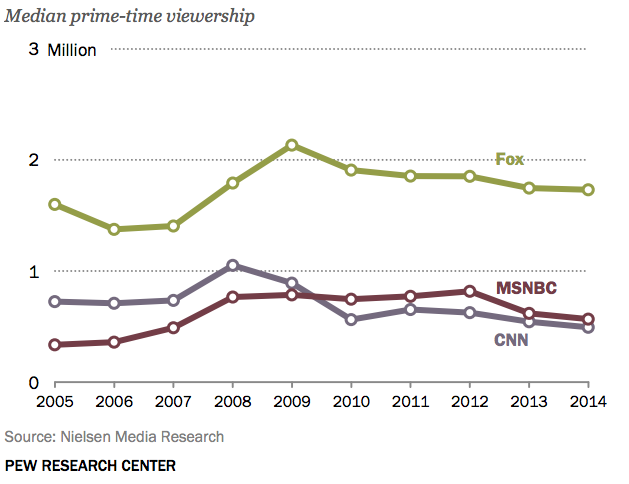 While Kevin Drum is focused on getting better, we’ve invited some of the remarkable writers and thinkers who have traded links and ideas with him from Blogosphere 1.0 to this day to contribute posts and keep the conversation going. Today we’re honored to present a post from Ezra Klein, editor-in-chief of Vox.

Cable news is in trouble. The Pew Research Center reports that the median daily audience for Fox, CNN, and MSNBC is down about 11 percent since 2008.

The Washington Post‘s Paul Farhi sees a grim future for the industry. He argues that cable news is pretty much where newspapers were a decade ago: Their audience is aging, their medium is being disrupted by new technologies, and the next generation of viewers is developing habits and preferences that they’re poorly placed to serve. (This is probably a good moment to note that I’m a contributor to MSNBC.)

The networks may still be making money—in 2014, Fox News managed $1.2 billion in profits, while CNN cleared $300 million and MSNBC made a bit more than $200 million—but Farhi suggests the “the cable news networks will face bankruptcy the same way Ernest Hemingway once described a character’s financial demise: ‘Gradually and then suddenly.'”

Perhaps that’s right. But while Farhi’s account of cable news’ woes focuses mainly on the cable part of the equation, it’s also worth considering the problems all three networks are having with the news itself.

The shooting in the Persian Gulf began tonight with the three broadcast networks committed to covering the war on a 24-hour basis, although their image as news leaders was damaged by the Cable News Network’s early dominance of the coverage…the networks’ image was certainly not helped when Defense Secretary Dick Cheney said he was following the attacks on Baghdad on CNN. At least one network station, an NBC station in Detroit, decided to quit its network’s coverage to run CNN’s. And NBC finally was compelled to interview CNN reporters on the air to get information out of Baghdad.

Fox News, for its part, saw basically exponential growth around 9/11, and then again around the 2008 campaign and Obama’s election. MSNBC’s rise was driven by the backlash to the Bush administration, and particularly to the Iraq War:

The network held those gains in the first half of the Obama era as liberals went from terrified to triumphant. But as liberals have gone from triumphant to a bit depressed and checked out, viewership has begun to decline.

The recent rise of cable news, particularly Fox and MSNBC, came in a period when the news—particularly political news—was unusually interesting.

Between 2000 and 2012, we saw a contested US presidential election, the largest terrorist attack ever on US soil, wars in Afghanistan and Iraq, repeated wave elections, a global financial crisis, the first black president, the rise of the tea party, the fight over Obamacare, and the first states to legalize gay marriage and marijuana—and much more. It’s been a weirdly interesting, consequential period in American politics. And so the cable news networks, which could devote 24 hours a day to covering these stories, benefited.

But now it’s an unusually dull period in American politics. Congress is gridlocked, and is likely to stay that way for the foreseeable future. The United States, thankfully, isn’t reeling from a terrorist attack or a financial crisis. We haven’t invaded Iran, at least not yet. And it’s not just cable news that’s losing viewers because of it. Turnout in the 2014 election was the lowest it’s been in 70 years.

You see this, I think, in the specific fortunes of the cable networks. Farhi reports that MSNBC lost 14 percent of its audience in 2014, and Fox lost 2 percent. But CNN prime time—which swung away from politics towards covering plane crashes and airing documentaries—is up 10 percent in 2015.

Which is all to say that Farhi may be right about the long-term decline of cable news—over some extended period of time, both network and cable channels are going to be diminished by whatever it is the internet creates in their place.

But year to year, a lot of the ups and downs might just be the appeal of what’s actually in the news. If President Scott Walker goes to war with Iran, MSNBC’s ratings are going to go up. If President Hillary Clinton takes away everyone’s guns, Fox is going to boom. But for now, relative peace and stability are bad news for cable news.