Jon Chait points out today that it doesn’t really matter very much whether Hillary Clinton moves a little leftward, a little center-ward, or frankly, in any other direction during the upcoming presidential campaign. Oh, it might 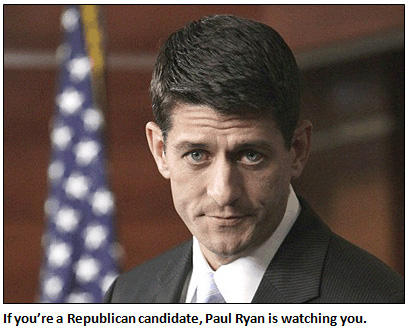 help her get elected, but once in office Republicans aren’t going to pass any of her proposals, no matter what they happen to be. Nonetheless:

The presidential election carries hugely important stakes, not just in policy realms where the president wields significant influence on her own, like foreign policy and judicial appointments, but also on domestic policy. It’s just that the stakes have nothing to do with Clinton’s proposals. What’s at stake is the Paul Ryan budget.

….Jeb Bush has already endorsed the Ryan budget. Marco Rubio has voted for it and said, “by and large, it’s exactly the direction we should be headed.” The other candidates have positioned themselves to their right….The overall thrust is perfectly clear: deep cuts in marginal tax rates along with large reductions in means-tested spending, and a deregulation of the energy and financial industries. Its enactment would amount to the most dramatic rollback of government since the New Deal.

….News coverage has oddly failed to frame this question as the center of the election. Journalists like personal drama, and they prefer to place the candidates and their individual ideas in the center of the portrait.

In fairness, the general election is a long way off. It’s pretty understandable that campaign reporters are currently spending most of their time on primary jockeying and not on the details of policy proposals—especially since most of the candidates haven’t yet done more than outline their domestic agendas anyway.

That said, no one took this very seriously in 2012, even though the Ryan budget was at stake then too. I’ll toss out three reasons I suspect the same thing will happen this time too:

So are Republicans serious about it this time? Beats me. I don’t really want to risk finding out, but I honestly have no idea.