So how does the general public feel about the possibility of the Supreme Court cutting off Obamacare subsidies for half the country in King v. Burwell? Kaiser asked them: 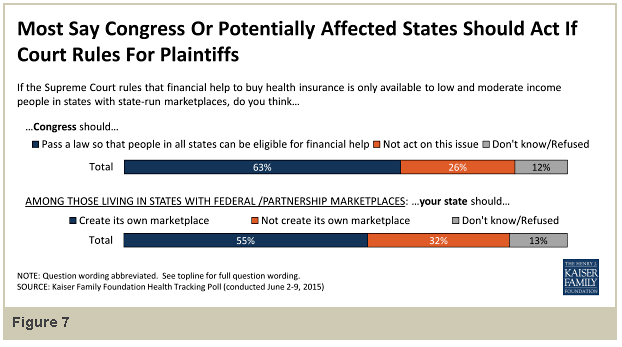 Nearly two-thirds think Congress should pass a law that makes everyone in all states eligible for subsidies. Unsurprisingly, this sentiment is strongest among Democrats and weakest among Republicans. In a related question, among those living in states that use the federal exchange—that is, the mainly red states that would lose subsidies if King v. Burwell succeeds—less than a third think their state should just shrug and refuse to create a state exchange that would reinstate the subsidies.

Now, Greg Sargent points out that a huge majority of respondents haven’t even heard of King v. Burwell or know what it means. So take this with a grain of salt. On the other hand, if King succeeds and subsidies suddenly disappear, I suspect everyone in the country will suddenly know exactly what it means. Sargent is pessimistic about where this will lead:

Let’s face it, once any post-King battle gets going, there will be plenty of opportunities for Republicans to roll out the old Obamacare Fog Machine once again. Republicans could pass something that temporarily extends subsidies but also repeals the individual mandate, and once Obama vetoes it, blame him for killing their effort to help all those millions of people. More generally, they can blame Obamacare itself for kicking all those millions off of Obamacare, and then argue that this is another way the law continues to victimize Americans, an argument they are already experimenting with rather creatively.

These narratives are of course tortured and incoherent, and Democrats may be able to break through the clutter by pointing out that the problem could be fixed very easily if Republicans wanted to join Dems in doing so….But it’s still possible Republicans could either not care about the damage they will sustain or mitigate it sufficiently. Once the both-sides-to-blame punditry kicks in alongside the GOP Obamacare Fog Machine, for many people this could just come across as a far-away Washington argument, with little clarity around why the parties can’t agree on a way to restore health coverage for millions — why can’t the two parties get along??? — and why they lost it in the first place.

Yeah, the public response to this could go either way. We already know that Republicans will respond loudly and with one voice. But how about Democrats? If King goes against them, will Democrats unite behind a simple narrative and be willing to loudly defend Obamacare with the same passion that Republicans oppose it? That’s what it will take. We’ll see if they have it in them.