Some interesting news today out of the Hawkeye State:

The Iowa straw poll, a political jamboree that has been a fixture in the Republican presidential nominating process for nearly four decades but has come under criticism in recent years, was cancelled Friday by state GOP leaders in a unanimous vote.

The Republicans cited a lack of interest in the event from leading presidential candidates and they said their decision will help preserve the importance of the Iowa caucuses, which are slated to be held early next year before any other state gets to vote.

It’s the end of an era. Or, at least, the end of the nation’s most famous state party fundraising extravaganza.

Now, it’s not true, as you might expect, that the straw poll has always been won by some lunatic conservative with an unusually fanatical following, thus doing nothing except embarrassing all the legitimate candidates. Still, last time around the winner was Michele Bachmann. Maybe that was the death knell. More and more, the rise of the tea party meant that mainstream 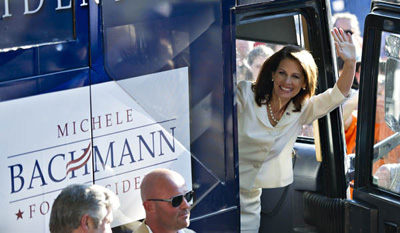 candidates were progressively less enthused about participating in an event they were likely to lose to a slavering mob. And for what? To help fund the Iowa GOP? There are easier ways of doing that.

Anyway, Ed Kilgore is my go-to guy to explain The Meaning Of It All for this kind of thing, but he hasn’t weighed in yet. But maybe he has since I began typing this. Hold on a sec….ah yes, he’s totally on top of things. Basically, the straw poll died for the reason everyone thinks it did: Because all the candidates got tired of it and didn’t want to risk participating. And yet:

You could make arguments, however, that Fox News did in the Straw Poll by making it a distraction from the national campaigning necessary to qualify for the first debate, or that Erick Erickson did it in by counter-scheduling a presidential cattle call for the same weekend, or that Jeb Bush did it in by announcing he wouldn’t be there practically before anybody had time to ask. The point is there were a lot of knives out for this event, and not enough determination among Iowa Republicans to blackmail candidates into participating or else.

Rest in peace, Iowa straw poll. In the age of Facebook and micro-targeting, you were a dinosaur. You won’t be missed.