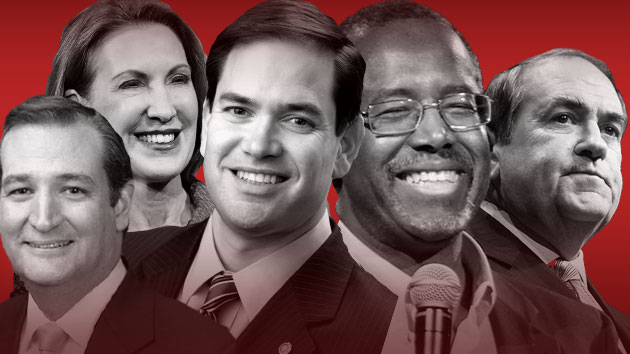 My body is continuing its revolt against all things good and true, so my mental acuity is scattered at best. But here’s something I’ve wanted to get out of my brain and onto pixels for a while. It’s based on nothing at all except my personal opinion. It’s not based on polls, nor anything the candidates have said, nor any detailed analysis of which blocs of voters each one will appeal to. It’s just my gut feeling. So here it is: my ranking of the 2016 Republican presidential field:

Not quite 0 percent, could maybe catch on if something really lucky happens

Legitimate candidates with a real shot at the nomination

Right off the bat, I know there are at least two people on my list who will generate some dissent: Rand Paul and Marco Rubio. But Rand Paul has no chance. Sorry. He has nearly Sarah Palin’s instincts at working the press and getting his base excited, but his views are just flatly too far out of the tea party mainstream to win the Republican nomination. As for Rubio, I just don’t see it. I know most people would put him down with Bush and Walker as having a legitimate shot, but…..really? The guy kinda reminds me of Pete Campbell on Mad Men. He’s got some talent, but no one really likes him that much. And he’s kind of an idiot, really. Still, he’s young, good looking, and appeals to older tea party types. To me, that means he’s an ideal running mate, but has no chance at the brass ring.

The thing that strikes me whenever I actually type up this list is how few legitimate contenders I find. But maybe I shouldn’t be surprised. In 2012, I thought from the very start that Romney was the only legitimate contender, and there are twice as many in 2016. Maybe that’s fairly normal, actually.

So here’s my question. You might disagree with my ranking, but probably not by a whole lot. There just aren’t very many candidates who have a serious chance at winning the nomination. So why are so many running? When guys like Dennis Kucinich or Ron Paul ran, I understood why. They just wanted a chance to present their views to a national audience. But that can’t be what’s motivating everyone on this list. So what is it? What is it that’s somehow convinced so many obvious losers that they actually have a shot at becoming the next president of the United States?