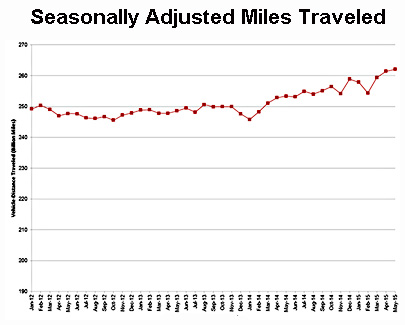 Bill McBride passes along the news that after a five-year slump, vehicle miles traveled in the US started to rise again in 2012, and in May of this year finally surpassed the previous record. However, this is a 12-month rolling average, so it’s a little slow to pick up trends. You can see things more clearly in the chart on the right, which shows seasonally-adjusted monthly miles traveled. In the past 18 months, it’s increased from 250 billion miles per month to 260 billion miles per month. That significantly outpaces population growth, which means that over the past year or so we’re not only driving more, we’re driving more per person.

Brad Plumer has much more here, but the basics seem simple: the economy has finally started growing and gasoline prices have been low. That’s enough to get us all back in our cars.

So was it ever the case that American young ‘uns fell out of love with the automobile, which partly explained why miles traveled dipped so dramatically during the recession? That’s a favored explanation among urban pundits, where Zipcars and Uber are popular and lots of people don’t bother owning cars. But I’ve always doubted it. It really does seem to be true that teenagers simply don’t care about learning to drive as much as teenagers of my generation, but for the most part that just means they learn to drive a little later. And if they live in the burbs, they need to drive, same as always. They couldn’t afford it while they were living in mom’s basement during the recession, but they can now, and that’s why car sales are up and miles driven are up.

We still love our cars, and now we can afford to use them. That will probably continue to be true until gas goes up to five bucks a gallon again. Here in California we’re surprisingly close to that ($4.49/gallon for my last fill-up!), but the rest of you are still enjoying relatively cheap prices. What’s more, with fracking moving along smartly, and Iran probably close to dumping another few million barrels of oil on the global market daily once sanctions ease up, prices seem likely to stay fairly low for the foreseeable future. That’s unfortunate news for the planet, but good news for consumers.