Hillary Clinton will propose a sharp increase in the capital-gains tax rate for the highest earners for investments held only a few years, a campaign official said Friday. Under the Clinton plan, investments held between one and two years would be taxed at the normal income-tax rate of 39.6%, nearly double the existing 20% capital gains rate.

….The rate for top-bracket taxpayers would be set on a sliding scale, with the lowest rate applied to investments held the longest. To qualify for the 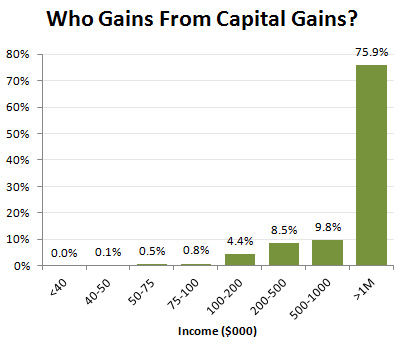 existing 20% rate, one would have to hold an investment for at least six years.

This change would apply only to high-income taxpayers and only to short-term investments. Lower-income workers would continue to get a break on capital gains taxes compared to the rate they pay on ordinary income. This is mostly for show, however: low-income workers barely have any capital gains income in the first place. The chart on the right from the Tax Policy Center shows the breakdown. Anyone making less than a six-figure income pays virtually no capital gains taxes, so changing their rates serves no purpose. It’s only at the high end of the income spectrum that the preferential capital gains rate matters.

Hillary’s proposal will enrage conservatives, who are convinced that capital gains rates are the magic key to prosperity. Since there’s virtually no evidence linking capital gains rates to economic growth, the cynical among you might think that what really motivates their tireless advocacy of low rates is that it benefits the rich enormously. But that’s only for the cynical among you.

In any case, folks who make more than a million dollars a year are going to be pretty exercised about this, even though Hillary’s proposal allows them to keep a modestly preferential rate for investments held longer than two years and the current super-preferential rate for investments held for six years or more. Still, details aside, the rich account for virtually all the capital gains taxes paid, and raising that rate in any way would hurt them considerably. These are also the folks who are donating vast sums to the Republican candidates, so you can be sure they’ll be insisting that their favored candidate goes after this proposal hammer and tongs. But Hillary is right. There’s little evidence that higher capital gains rates do much harm, and a fair number of reasons to actively prefer a higher rate. Jared Bernstein has more here.