It seems that Scott Walker may be having problems. First, there’s this from our own Russ Choma about Walker’s fundraising woes in Texas, home to America’s biggest treasure trove of conservative zillionaires:

The union-busting Wisconsin governor may be a conservative darling, but he’s way behind the curve when it comes to courting Texas’ biggest money men. Bill Miller, a top Texas lobbyist who regularly advises megadonors on their contributions, says he’s heard almost no buzz from the donor class about Walker….”No one is asking about him,” Miller says. “None of our clients. We have a huge client base. It’s oddly quiet for a guy that’s supposedly top three among the potential nominees.”

….Walker campaign aides say he has been to Austin, Houston, and San Antonio as well, and the response has been “enthusiastic.” Future trips to Texas are planned, they say. But if there’s an on-the-ground 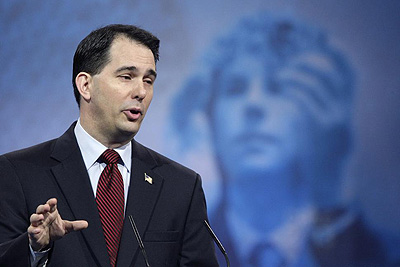 fundraising operation for Walker, Miller isn’t the only one who has missed it.

….”Scott Walker has no visible organization in my part of the state. He really doesn’t come up,” says Gaylord Hughey, a lawyer who’s known as the “don of East Texas” by Republican operatives. Hughey has worked as a bundler for the campaigns of George W. Bush and John McCain, and he’s currently signed up to raise money for Jeb Bush. “Among the sort of really hard R Republicans, Scott Walker is probably big,” he notes, “but to the business donor group, he has not really resonated.”

Hmmm. Maybe Walker isn’t mean enough for Texas? That’s probably not it. In fact, Paul Waldman thinks the guy is so mean it’s turning into a problem of its own for Walker. Exhibit A: Walker is hell-bent on demanding drug tests for all welfare recipients:

This is why Scott Walker is never going to be president of the United States.

But this hasn’t discouraged politicians like Walker….The test is the point, not the result. Walker isn’t trying to solve a practical problem here. He wants to test food stamp recipients as a way of expressing moral condemnation. You can get this benefit, he’s saying, but we want to give you a little humiliation so you know that because you sought the government’s help, we think you’re a rotten person.

….What does this have to do with Walker’s chances of winning a general election? What George W. Bush understood is that the Republican Party is generally considered to be somewhat, well, mean….So when Bush campaigned as a “compassionate conservative”…he was sending a message to moderate voters, one that said: See, I’m different. I’m a nice guy.

….And Scott Walker’s attitude is nothing like George W. Bush’s. He practically oozes malice, for anyone and everyone who might oppose him, or just be the wrong kind of person.

So money in Texas-sized chunks is looking like a problem for Walker in the primaries, and his Cruella de Vil-sized malice is likely to be a problem in the general election.

The conventional wisdom about Walker—which I’ve agreed with in the past—is that he’s the candidate best suited to appeal to both the Republican base, thanks to his hardcore meanspiritedness, and to business-class Republicans, thanks to his executive experience and relatively mild demeanor. The problem is that it’s a tricky act to make both of these personas work at the same time, and so far Walker doesn’t even seem to be trying. He’s just sticking with the Mr. Mean persona, and it’s not clear if that’s even enough to win the primaries, let alone get him into the White House. He’s going to need to change his tune if he ever wants to hear the Marine band playing “Hail to the Chief” for him.