What’s the source of Donald Trump’s appeal?1 Responding to one of David Brooks’ periodic psychoanalysis sessions of the American voting public, Greg Sargent makes a wacky counterproposal: “What if a key source of his appeal is that a lot of Republican voters agree with what he’s saying about the issues?”

That’s a thought. Trump’s position on the issues is pretty much the same as all the other GOP candidates, except more, and “more” seems to be what a lot of Republicans want these days. You can never have too much “more” in today’s tea-party dominated Republican Party, and Trump has more “more” than anyone. 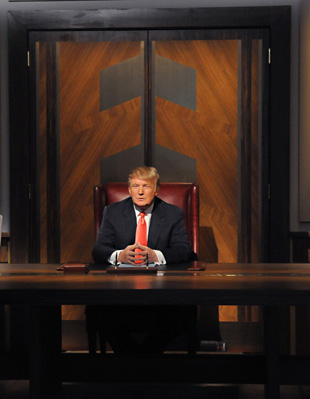 but he’s also the star of Celebrity Apprentice, and that’s how a lot of people view him these days.

You’ve seen the show, right? You’re not one of those vegan weenie lefties who lives in a bubble of art museums and Audubon meetings, unwilling to sully yourself with popular TV, are you? The kind who looks down on regular folks?

Oh hell, sure you are. So here’s how the show works. A bunch of C-list celebrities compete in teams each week at tasks given to them by Trump. At the end of the show, Trump grills the losing team in the “boardroom,” eventually picking a single scapegoat for their failure and firing them. As the show ends, the humiliated team member shuffles disconsolately down the elevator to a waiting car, where they are driven away, never to be seen again. This is the price of failure in Trumpworld.

Now, picture in your mind how Trump looks. He is running things. He sets the tasks. The competitors all call him “Mr. Trump” and treat him obsequiously. He gives orders and famous2 people accept them without quibble. At the end of the show, he asks tough questions and demands accountability. He is smooth and unruffled while the team members are tense and tongue-tied. Finally, having given everything the five minutes of due diligence it needs, he takes charge and fires someone. And on the season finale, he picks a big winner and in the process raises lots of money for charity.

Do you see how precisely this squares with so many people’s view of the presidency? The president is the guy running things. He tells people what to do. He commands respect simply by virtue of his personality and rock-solid principles. When things go wrong, he doesn’t waste time. He gets to the bottom of the problem in minutes using little more than common sense, and then fires the person responsible. And in the end, it’s all for a good cause. That’s a president.

Obviously this is all a fake. The show is deliberately set up to make Trump look authoritative and decisive. But a lot of people just don’t see it that way. It’s a reality show! It’s showing us the real Donald Trump. And boy does he look presidential. Not in the real sense, of course, where you have to deal with Congress and the courts and recalcitrant foreign leaders and all that. But in the Hollywood sense? You bet.

So keep this in mind, you liberal latte sippers and Beltway media elites. For the past seven years (11 years if you count the original Apprentice show), about 10 million people3 have been watching Donald Trump act presidential week after week. He’s not a buffoon. He’s commanding, he’s confident, he’s respected, he demands accountability, and he openly celebrates accomplishment and money—but then makes sure all the money goes to charity at the end. What’s not to like?

1Actually, according to the latest polls, he appeals to about 24 percent of 23 percent of the electorate, which works out to a little less than 6 percent support. If you keep that in mind, Trumpmania starts to seem both a little less impressive and a little less scary. Still, let’s ignore that and just work with the premise of trying to figure out Trump’s appeal. Otherwise I don’t have a blog post to write.

3Though that’s dropped in the past couple of seasons. Maybe Trump decided he needed to run for president before the show finally suffered the ultimate disgrace of being canceled.