President Obama is unveiling his plan to reduce carbon emissions from power plants today, and it’s generally being hailed as the most important environmental regulation of his presidency. Tim McDonnell has the details here. Rebecca Leber outlines the probable legal attack on Obama’s plan here.

But Michael Grunwald isn’t buying the hype. He’s not impressed with Obama’s plan to reduce power plant emissions 32 percent by 2030:

That’s nice, but by the end of this year, according to Bloomberg New Energy Finance, the power sector’s emissions will already be down 15.4 percent from 2005 levels — about half the anticipated reductions in just a decade, and 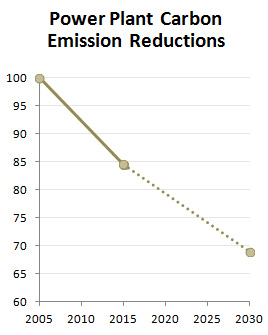 ….If you’re really ranking them, the Clean Power Plan is at best the fourth-strongest action that Obama has taken to combat climate change, behind his much-maligned 2009 stimulus package, which poured $90 billion into clean energy and jump-started a green revolution; his dramatic increases in fuel-efficiency standards for cars and trucks, which should reduce our oil consumption by 2 million barrels per day; and his crackdown on mercury and other air pollutants, which has helped inspire utilities to retire 200 coal-fired power plants in just five years.

This is a little unfair in two ways. First, the 15 percent reduction of the past decade was the low-hanging fruit. The initial cuts are always the easiest. The next 15 percent will be harder, and mandating that it happen at about the same rate is more stringent than it sounds.

Second, the decrease over the last decade happened mostly because gas-fired plants became cheaper than coal thanks to the boom in natural gas fracking. That’s a one-time deal, and there’s no guarantee that something similar will drive further decreases. Having a mandate in place forces it to happen regardless of future events in the energy market.

That said, Grunwald has a point in a technical sense: the reductions mandated in the EPA plan are good but not great, and the mandates for renewable energy are pretty unambitious. Obama could have done better.

Or could he? That’s a never-ending source of disagreement. Should Obama have gotten a bigger stimulus? Should he have insisted on a public option in Obamacare? Could he have put in place stronger financial regulations than he got in Dodd-Frank? Could he have negotiated a stronger treaty with Iran?

In the meantime, Grunwald is right to say that the new mandates aren’t really all that tough. At the same time, the fact that we have any power plant mandates at all really is a big deal. Just setting the precedent that the federal government should regulate carbon emissions from power plants is a critical first step, and if it survives court challenges and congressional temper tantrums it will likely lead to further cutbacks in the future. And that’s a big deal.