So how are we doing in our efforts to train moderate Syrian allies to help us in the fight against ISIS? Here’s the New York Times two days ago:

A Pentagon program to train moderate Syrian insurgents to fight the Islamic State has been vexed by problems of recruitment, screening, dismissals and desertions that have left only a tiny band of fighters ready to do battle.

Those fighters — 54 in all — suffered perhaps their most embarrassing setback yet on Thursday. One of their leaders, a Syrian Army defector who recruited them, was abducted in Syria near the Turkish border, along with his deputy who commands the trainees….Defense Secretary Ashton B. Carter has acknowledged the shortfalls, citing strict screening standards, 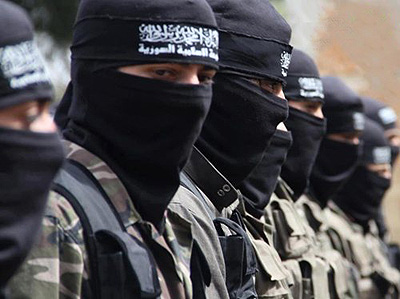 which have created a backlog of 7,000 recruits waiting to be vetted. Mr. Carter has insisted the numbers will increase.

Okay, I guess 54 is a….start. So how good are they? Here’s the New York Times today:

A Syrian insurgent group at the heart of the Pentagon’s effort to fight the Islamic State came under intense attack on Friday….The American-led coalition responded with airstrikes to help the American-aligned unit, known as Division 30, in fighting off the assault….The attack on Friday was mounted by the Nusra Front, which is affiliated with Al Qaeda. It came a day after the Nusra Front captured two leaders and at least six fighters of Division 30, which supplied the first trainees to graduate from the Pentagon’s anti-Islamic State training program.

….“This wasn’t supposed to happen like this,” said one former senior American official, who was working closely on Syria issues until recently, and who spoke on the condition of anonymity to discuss confidential intelligence assessments….Division 30 said in a statement that five of its fighters were killed in the firefight on Friday, 18 were wounded and 20 were captured by the Nusra Front. It was not clear whether the 20 captives included the six fighters and two commanders captured a day earlier.

Let’s see, that adds up to either 43 or 51 depending on how you count. Starting with 54, then, it looks like Division 30 has either 11 or 3 fighters left, and no commanders. But apparently that’s not so bad!

A spokesman for the American military, Col. Patrick S. Ryder, wrote in an email statement that “we are confident that this attack will not deter Syrians from joining the program to fight for Syria,” and added that the program “is making progress.”

….[A senior] defense official, speaking on the condition of anonymity to discuss intelligence reports, described what he called “silver linings” to the attack on Friday: that the trainees had fought effectively in the battle, and that coalition warplanes responded quickly with airstrikes to support them.

The trainees fought effectively? There are no more than a dozen still able to fight. That’s not the same definition of “effective” that most of us have. As for the US Air Force responding quickly, that’s great. But the quality of the US Air Force has never really been in question.

This is starting to make Vietnam look like a well-oiled machine. Stay tuned.