Over the weekend1 Robert Kagan wrote an essay in the Wall Street Journal titled “America’s Dangerous Aversion to Conflict.” That seemed….wrong, somehow, so I read it. Mostly it turned out to be a tedious history lesson about the run-up to World War II, 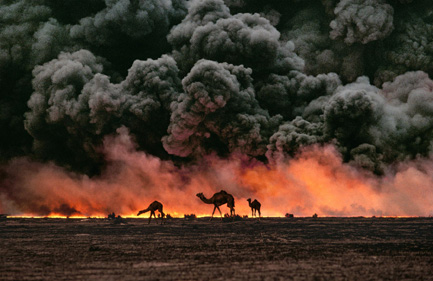 basically a long version of the “Munich!” argument that conservatives make every time we fail to go to war with somebody. But there was also this:

President George H.W. Bush and his national security adviser, Brent Scowcroft, sent half a million American troops to fight thousands of miles away for no other reason than to thwart aggression and restore a desert kingdom that had been invaded by its tyrant neighbor.

….A little more than a decade later, however, the U.S. is a changed country. Because of the experiences in Iraq and Afghanistan, to suggest sending even a few thousand troops to fight anywhere for any reason is almost unthinkable. The most hawkish members of Congress don’t think it safe to argue for a ground attack on the Islamic State or for a NATO troop presence in Ukraine. There is no serious discussion of reversing the cuts in the defense budget, even though the strategic requirements of defending U.S. allies in Europe, Asia and the Middle East have rarely been more manifest while America’s ability to do so has rarely been more in doubt.

This is one of the tropes that conservative hawks haul out with tiresome predictability, but it’s flat wrong. Even now, when Americans have every reason to be skeptical of military action in the Mideast, poll after poll shows a surprising acceptance of it. Whether the subject is Iran, Syria, or ISIS, it’s plain that many Americans are already primed for military action, and many more can be talked into it pretty easily. The United States has fought half a dozen major wars in the past quarter century, and the surprising thing isn’t that we’ve gotten war weary. Quite the contrary: the surprising thing is that we’re plainly ready to keep it up given the right incentive.

Kagan’s argument is also dishonest in a couple of common ways. First, he argues that sending “even a few thousand troops” anywhere is now unthinkable. This is nonsense. Over the past few months we’ve already sent a few thousand troops to fight ISIS, and this has barely raised a peep even from liberals. There is an aversion to sending a hundred thousand ground troops to fight ISIS and starting up another full-scale war and occupation of Iraq. If Kagan objects to that, fine. But that’s what we’re talking about, and Kagan should own up to it.

Second, after spending several paragraphs singing the praises of our military response during the Cold War, Kagan bemoans our unwillingness to send troops to Ukraine. But again, that’s nonsense. During the Cold War, we fought plenty of proxy wars but never, never, never sent troops to fight the Soviets directly. Not in Hungary. Not in Czechoslovakia. Not in Afghanistan. If Kagan wants us to be more belligerent toward Russia than we ever were toward the old Soviet Union, that’s fine too. But he needs to say so, rather than subtly rewriting history.

Kagan, like so many other hawks, is intent on pretending that the threats we face today are as dangerous as any in the past century. But that’s simply not true. World War I, World War II, and the Cold War were almost unimaginably greater threats to the world than a few minor territorial grabs by Vladimir Putin, a civil war in Syria, and the takeover of a chunk of Iraq by a ragtag group of delusional jihadists. Pretending otherwise does Kagan’s reputation no favors.

1Actually, Kagan wrote this over a weekend in 2014. I’m not really sure why it popped up during my perusal of the Journal last night. But I suppose it doesn’t matter: Kagan would likely say the same thing today that he did a year ago.