Paul Krugman writes today that Republicans are engaged in an act of “political self-destructiveness.” They consistently support entitlement cuts, including cuts to Social Security, despite the fact that only 6 percent of Americans want to cut Social Security while 51 percent want it increased. Why are they doing this? Krugman suggests that it’s because they’re trying to curry favor with wealthy donors, who generally favor cuts.

I want to push back on this a bit. Krugman’s comment is based on a post by Lee Drutman, which in turn is based on data from the 2012 National Election Studies survey. But there have been lots of other polls about Social Security too. Here are three taken at random from PollingReport.com: 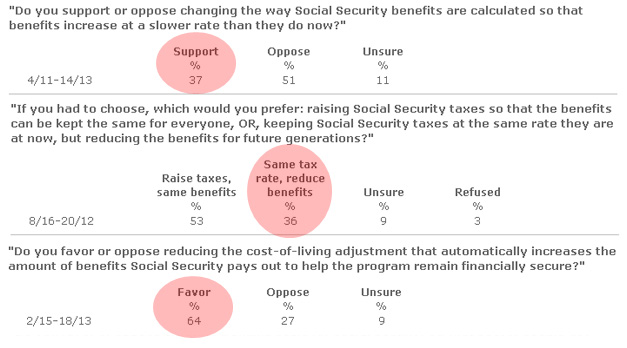 Opinions about Social Security are very sensitive to question wording. If you flatly ask “Do you think we should cut Social Security benefits?” almost everyone will oppose it. But if you preface it with a question about the solvency of the system, more people are in favor of cuts. And if you ask about, say, raising the retirement age, you get even more people in favor—because most of them don’t automatically associate that with “cuts.”

None of this is to say that cuts to Social Security—even when couched in veiled terms—are popular. They aren’t. But support is a lot higher than 6 percent. Usually it’s somewhere between 30-50 percent, and it’s often a substantial majority among Republican voters.

So that’s how Republicans get away with this: they appeal to fellow Republicans and they’re careful about how they frame their proposals. In other words, politics and salesmanship. But I repeat myself.

POSTSCRIPT: Why did I bother writing this post? Because it’s important not to kid ourselves about what the public really thinks. Opinions aren’t shaped in a vacuum. They’re formed in the context of time, place, tribal affiliations, external events, and framing. Simple, isolated questions don’t capture any of that.

We do ourselves no favors if we blithely assume that Republicans are committing obvious suicide without understanding exactly how they maintain support for a position that seems pretty unpopular at first glance. The answer is that they do it very skillfully, and if we want to fight back we have to understand that.