So the big news this weekend was President Obama’s decision to change the name of Mt. McKinley back to Denali. As near as I can tell, the only people who truly care about this are:

Of these, Alaskans are pro-Denali; Ohioans are proudly pro-McKinley; mountain climbers have been calling it Denali for years already; and trivia buffs are almost certainly pro-Denali since they love it whenever something changes that allows them to pedantically correct other people.

So far—to my pleasant surprise, I admit—there’s been very little complaining about how Obama is—again!—bending to the forces of political correctness and identity politics by kowtowing to the icy cold branch of the native American community. But the week is young and the easily outraged are probably still rubbing the sleep out of their eyes. Give them time.

For the time being, though, the pro-McKinley side has only the Ohioans, who have been battling Alaskans over this for decades. Ohioans are mighty defenders of William McKinley, proud son of Niles, Ohio. So proud, in fact, that one of their own renamed Denali to Mt. McKinley in 1896 merely because McKinley had just been nominated for president. Alaskans probably had no idea this was even happening, and in any case they weren’t yet a state and could do little about it. 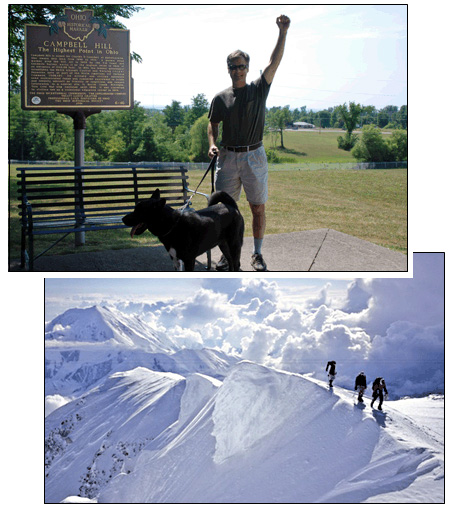 They finally tried to officially reverse this power grab in the 70s, but sneaky Ohioans took advantage of a loophole to prevent the US Board on Geographic Names from acting. That ended yesterday when Obama decided to rename America’s highest peak himself.

The obvious solution to all this is to rename Ohio’s tallest mountain. Unfortunately, Ohio is flat and has no mountains at all. Its highest point is Campbell Hill, topping out at a pedestrian 1,550 feet. They could rename it McKinley Hill—unless, of course, that would outrage the descendants of Charles D. Campbell—but that’s quite a comedown from the majesty of Denali, as the pictures on the right show.

What to do? Nothing much, I suppose, except for Ohio’s congressional delegation to rant and rave about Obama’s unilateral power grab etc. That’s fine. Hometown pride demands no less. Even at that, though, I have to give props to Rep. Bob Gibbs for this masterpiece of outrage:

I hope my colleagues will join with me in stopping this constitutional overreach. President Obama has decided to ignore an act of Congress in unilaterally renaming Mt. McKinley in order to promote his job-killing war on energy.

Constitutional overreach? Sure, whatever. That’s garden variety stuff by now. But how does removing the name of America’s 25th president advance Obama’s job-killing war on energy? Inquiring minds want to know.

As for the political implications, all you need to know is this: Alaska has three electoral votes. Ohio has 18 and is routinely a critical swing state. You may draw your own conclusions from this.