Ross Douthat writes today about the split on taxes between the Republican donor class and the average Republican voter:

The donorist vision, in my experience, has its own distinctives: It’s less interested in the specifics of the Laffer curve or any other economic theory, and more inclined to take a vaguely Randian view of high taxes as an unjust punishment for success….

Then the average Republican voter has a different perspective still….This prototypical Republican voter, who might be pulling in $45,000 working a trade or $95,000 running a small business (or vice versa), isn’t necessarily being soaked by the federal income tax, but he or she remains an anti-tax voter because even small tax fluctuations year to year feel like an immediate threats to the ability to save, to plan, to expand or preserve a business, to buy a home and put money away for college and think about retirement and generally preserve their peace of mind.

Douthat’s post was inspired by Donald Trump’s heresies on taxes, but I wouldn’t read too much into that. As I noted yesterday, it looks to me as if Trump is slowly but steadily moving in the direction of Republican orthodoxy with only a few minor populist concessions.

But I was happy to see Douthat acknowledge that the average Republican voter is not exactly being soaked by taxes. As it happens, that’s putting it mildly. The median family in America earns about $65,000. That family, on average, 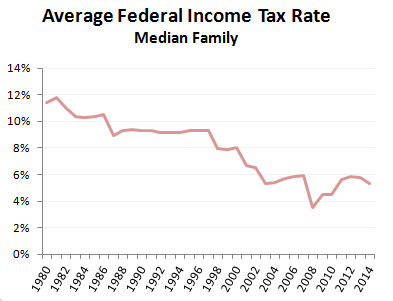 pays a federal income tax rate of about 5 percent.

In other words, for the average voter this isn’t about money. Even the hardest core tea partiers can’t possibly be outraged at the prospect of paying 5 percent of their income to Uncle Sam. The plain truth is that middle-class tax cuts are becoming all but impossible these days: the average family no longer pays enough in taxes to even notice a small change up or down. And the trend over the past few decades has been nothing but down anyway.

And yet, taxes continue to be a potent message. Why? It’s not because of payroll taxes. Numerous polls have shown that most voters consider these fair because they pay for Social Security and Medicare benefits down the road. Nor do state income taxes change the overall picture much.

Republicans have been in this quandary for a while. Cutting taxes is pretty much all they’ve got on the economic front, but there’s not a whole lot left to cut for the average Joe. And yet, the anti-tax message really does continue to resonate. Why? I’d suggest two things.

First, most people are bad at math. They may be paying about 5 percent of their income in federal taxes, but if you ask them, they’d probably guess it’s more like 20 or 30 percent. Republicans have long complained that weekly withholding makes taxes invisible, and they have a point. But right now, that works in their favor.

Second, a lot of people are afraid that Democrats will raise their taxes. This prospect carries more punch than the prospect of a cut from Republicans.

In any case, even though Donald Trump is coming around to Republican orthodoxy on taxes, I do think he’s highlighting a real dilemma for Republicans. Raising taxes on hedge fund managers is no big deal. They can be thrown under the bus if necessary. But the other half of Trump’s message is about reducing taxes on average middle-class families. That may still be a potent message, but even now it’s not as potent as it was 30 years ago. And going forward, Democrats are eventually going to figure out a way to make it clear that federal income taxes really aren’t very onerous anymore.1 When that happens, it’s bye bye tax cuts for the rich—because the only way you can sell tax cuts for the rich is to hide them behind tax cuts for the middle class. For simple mathematical reasons, that particular con is coming to an end.

1Of course, they haven’t figured this out yet, so maybe I’m being too optimistic.