Over at Wonkblog, Roberto Ferdman passes along some fascinating new research on the frustrating problem of getting kids to eat their vegetables in school lunches:

It turns out there might be an ingenious solution hiding beneath everyone’s nose.

Researchers at Texas A&M University [found] there’s at least one variable that tends to affect whether kids eat their broccoli, spinach or green beans more than anything: what else is on the plate. Kids, in short, are much more likely to eat their vegetable portion when it’s paired with a food that isn’t so delicious it gets all the attention. When chicken nuggets and burgers, the most popular items among schoolchildren, are on the menu, for instance, vegetable waste tends to rise significantly. When other less-beloved foods, 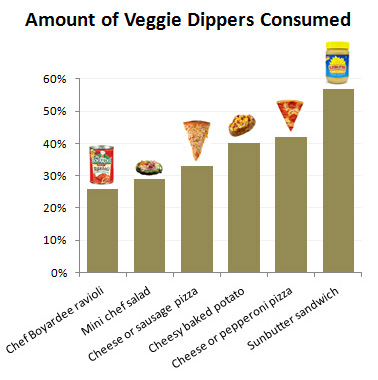 like deli sliders or baked potatoes, are served, the opposite seems to happen.

So let me get this straight. The way to get kids to eat vegetables is to serve them crappy-tasting food that makes the vegetables seem good by comparison? That’s the ingenious solution?

Yes indeed. So if we just starve the little buggers and then give them a choice of steamed broccoli or vegemite on wheat, they might go ahead and force down the broccoli. And since you are all sophisticated consumers of the latest research, I’m sure you want to see this in chart form. So here it is for veggie dippers (notably, a “vegetable” already disguised with mounds of ranch dressing). As you can see, when paired with yummy Chef Boyardee ravioli, the kids turn up their noses at the dippers. But when the entree is a yucky sunbutter sandwich, kids cave in and sullenly eat more than half of the little devils.

This all comes from “Investigating the Relationship between Food Pairings and Plate Waste from Elementary School Lunches.” However, if you click the link and read the report, you will almost certainly find yourself tormented with yet more questions. I’m here to help:

Q: What the hell is a sunbutter sandwich?

A: According to an exhaustive search of the entire internet, it’s a peanut-free peanut butter sandwich made out of sunflower seed spread.

Q: What vegetable do kids hate the most?

Q: What’s the most popular vegetable?

Q: Knock it off. What’s the most popular real vegetable?

A: It’s a little hard to say, but the garden salad with ranch dressing seems to do relatively well.

A: Apparently so. And as loathsome as it sounds, I suppose it’s not really all that different from a slice of cheese pizza.

Q: Is a whole dill pickle really a “vegetable”?

A: In west Texas, where this study was done, it is.

Q: How about mashed potatoes?

A: It appears so.

Q: Is one of the authors really from the Alliance for Potato Research and Education?

A: That’s what it says. In fact, they’re the ones who financed this study. I can’t tell if they got their money’s worth or not.