Apparently the new hotness in the pharmaceutical industry is this: (1) Find an old, generic drug that’s used only rarely and made by only one company. (2) Buy it. (3) Jack up the price astronomically. Since you have a monopoly, there’s not much that anyone can do about it. And since it’s a rarely used drug, it’s not really worth anyone’s time to manufacture a competing version.

At the New York Times, Andrew Pollack spotlights this problem with the story of Daraprim, which was acquired last month by an ex-hedge fund manager who immediately raised 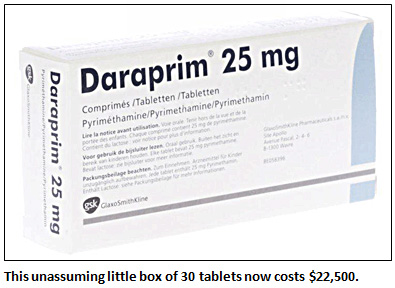 Daraprim, known generically as pyrimethamine, is used mainly to treat toxoplasmosis, a parasite infection that can cause serious or even life-threatening problems for babies born to women who become infected during pregnancy, and also for people with compromised immune systems, like AIDS patients and certain cancer patients.

Martin Shkreli, the founder and chief executive of Turing, said that the drug is so rarely used that the impact on the health system would be minuscule and that Turing would use the money it earns to develop better treatments for toxoplasmosis, with fewer side effects.

“This isn’t the greedy drug company trying to gouge patients, it is us trying to stay in business,” Mr. Shkreli said. He said that many patients use the drug for far less than a year and that the price was now more in line with those of other drugs for rare diseases.

“This is still one of the smallest pharmaceutical products in the world,” he said. “It really doesn’t make sense to get any criticism for this.”

….Turing’s price increase could bring sales to tens or even hundreds of millions of dollars a year if use remains constant.

So there you have it. It’s such a tiny market that, really, who cares? Chill, people. And anyway, they’re going to use their newly found profits to develop wonderful new treatments for toxoplasmosis. I wouldn’t hold my breath for that to happen. Besides, doctors who use the drug say that Daraprim works fine and no one’s really clamoring for something better.

Welcome to the 21st century pharmaceutical biz, working hard to find new and innovative ways of gouging the most vulnerable members of society. And for once, we can truly say that this could happen only in America, since no other country would allow it. Makes you proud, doesn’t it?