The incident went viral on social media and the hashtag #IStandWithAhmed was the top non-promoted U.S. trend on Twitter early Wednesday morning. Some supporters alleged Mohamed was arrested only because of his name, or the way 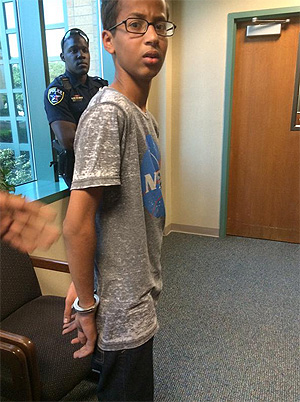 he looked. Others claimed the situation was a case of Islamaphobia.

What went viral? And why quote Fox News on the subject? More on that in a moment.

The topic here is Ahmed Mohamed, a 14-year-old robotics geek at MacArthur High School in Irving, Texas. He decided to build an electronic clock to show off to his teacher, and ended up arrested instead. Apparently it beeped during his English class, and his English teacher decided it looked kind of like a bomb. So it was confiscated and Ahmed was led off in handcuff and then suspended for three days. This despite the fact that (a) it wasn’t a bomb, (b) nobody thought it was a bomb, and (c) Ahmed told everyone who saw it that it was a clock. After the incident, the school sent out a letter to all parents not admitting any fault, but basically bragging about how vigilant they’d been and recommending that they review the school’s Code of Conduct with their kids.

So why link to Fox News on the subject? To highlight the fact that, as near as I can tell, conservative blogs and websites have all but ignored this story. That’s even though it practically saturated my Twitter feed last night and, as Fox says, went viral on social media. I realize that this kind of thing doesn’t interest conservatives much, but it’s such a blatant and stupid abuse of power that you’d think it would at least give them an opportunity to show that occasionally they care about obvious bigotry like this. Plus they’d get to take a shot at a public school and its stupid overpaid administrators. What more do they want?

UPDATE: I see that President Obama and Hillary Clinton have just tweeted messages of support for Ahmed. I think it’s safe to say that conservative outlets will now start to weigh in. But it poses a dilemma for them. Even conservatives can’t really defend what happened here. On the other hand, they can hardly agree with Obama, can they? What to do?

My guess: defend Ahmed, but somehow make the claim that Obama’s terrorist-appeasing ways are responsible for an all-too-understandable suspicion of brown people. It’s a win-win!