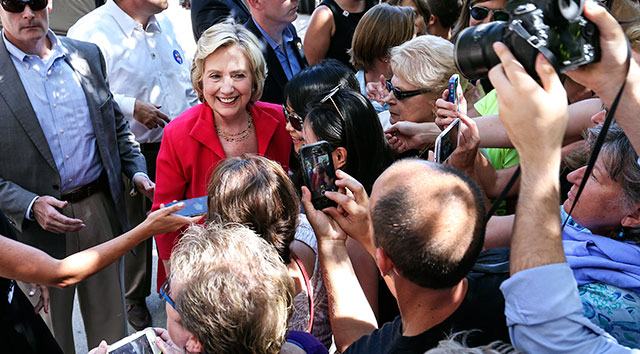 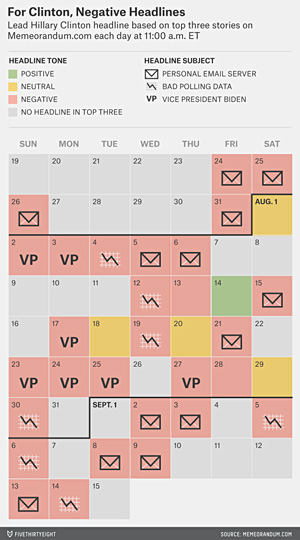 Nate Silver takes a quantitative look at Hillary Clinton’s headlines since July 24 and concludes that she’s just getting hammered. The calendar on the right shows the near-daily punches she’s taking:

…What changed? July 24 was the morning after The New York Times reported that “a criminal investigation” had been launched into whether Clinton had “mishandled sensitive government information” on her email account. That report turned out to be mostly erroneous; the Times later appended an editor’s note to the article, which is about as close as a newspaper will get to retracting a story. Still, the email story was back in the news after several months when there hadn’t been much reported about it. And subsequent stories about the investigation into Clinton’s email server, from the Times and other news outlets, have proved to be better-reported than the Times’s initial misfire.

Meanwhile, that was also about the time that speculation about a late Biden entry ramped up….Then, of course, there are the stories about Clinton’s poll numbers.

I know I’m repeating myself, but where’s the beef? Hillary Clinton received official emails on a personal account. Jeb Bush did the same thing. So did Colin Powell. So did a bunch of folks in the Bush White House (using RNC servers). Some of the emails Hillary received may have contained information that’s now deemed classified, but it’s quite clear that government officials routinely send classified reports over email. Maybe they shouldn’t, but they do. It’s neither new nor unusual nor really a very big deal.

As for the personal emails, they’re a complete red herring. No one ever turns over personal emails, and officials have always decided for themselves which ones are personal. No one cares whether those emails were on a private server.

So we’re left with one thing: Hillary received official emails on her personal account. That’s it. It’s fair game for Republicans to attack her bad judgment in doing that, but there’s just nothing more to learn about it. She did it. She’s admitted it. It’s part of her record as secretary of state. It’s done.

There’s just got to be something else about Hillary Clinton that reporters are interested in. Maybe she needs to start yammering away about razing every coal-fired power plant in the country and turning northern Iraq into a glassy plain. That seems to be what it takes these days.