A couple of days ago I stumbled across a story about the weekly email that NBER sends out touting its latest working papers. They recently decided to randomize the order of the papers separately for each of the 23,000 emails they send out. “This will mean that roughly the same number of message recipients will see a given paper in the first position, in the second position, and so on.”

One thing led to another, and I never wrote about this. But Neil Irwin picks up the ball today:

No editorial judgment goes into the sequence in which the working papers appear. It is random, based on the order in which the paper was submitted and in which the N.B.E.R. approval process was completed. In other words, there is no inherent reason to think that the first paper listed is more groundbreaking, important or interesting than the third or 17th.

Perhaps even more amazing, it wasn’t just that more people pulled up the paper that appeared first. Those papers also received 27 percent more citations in later research, though that result was based on a relatively small time period. Having the luck to appear first in the email 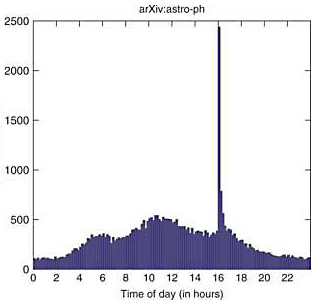 meant that a given working paper had greater influence in subsequent economic research.

In other words, high-IQ economists are as lazy about clicking only the first entry on a list as your average teenage Google user. And it’s not just economists. The same thing is true of physicists. The inventor of arXiv, a website that publishes early copies of physics papers, discovered the same thing several years ago. You can see the result in the graph at the right. Physicists might be as lazy as the rest of us, but they’re not dumb, and they all figured out a long time ago that being first on the list is a big deal. Since each day’s announcements are made in the order they were submitted, starting at 4 pm the previous day, it means that a huge herd of physicists are all pounding their Enter keys at 4 pm in a desperate effort to be first on the next day’s list.

The moral of this story is that….economists and physicists are as lazy and irrational as everyone else? I guess. But the real moral of the story is for you not to be trapped by the tyranny of the list. The next time you google something, try clicking on the 8th link. In fact, do what I do and change the default number of hits to 50 per page and then try clicking the 18th link. You might be pleasantly surprised.