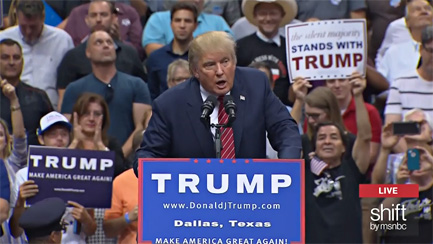 Which of these countries is not like the others?

Answer: When Donald Trump goes on a tear about foreign countries that are stealing our jobs thanks to their “cunning” and “ruthless” leaders, he always talks about our horrible trade deficit. China: $300+ billion. Japan: $60+ billion. Mexico: $50+ billion.

Who doesn’t he mention? Germany, which is in second place at $80+ billion. Why is that? What is it that makes Germany not like those other countries?

And as long as we’re on the subject of Trump, I caught a bit of his speech in Dallas today and heard him bragging about the fact that every network was covering him. He explained it this way: “It’s a very simple formula in entertainment and television. If you get good ratings—and these aren’t good, these are monster—then you’re going to be on all the time even if you have nothing to say.” Credit where it’s due: Trump may not actually be much of a builder, but he sure does know his TV. And himself, apparently.

Also worth noting: Trump got plenty of cheers for all his usual shoutouts, but by far the biggest cheer came when he promised to toss out every illegal immigrant within his first 18 months. “We have to stop illegal immigration,” he said. “We have to do it.” That set the arena rocking for nearly a full minute, ending in a fervid chant of “USA! USA! USA!” Judging by this, immigration is still the single biggest key to his appeal.

Finally, on a more amusing note, Trump complained that because all his events are televised, he can’t just give the same speech over and over like other politicians. I wonder if he actually believes this? I haven’t heard anything new from Trump in months. Every speech he gives relies on all the same snippets. He changes the order depending on his mood, but it’s always the same stuff. He may be new to politics, but the idea of a standard stump speech is something he seems to have in his blood.