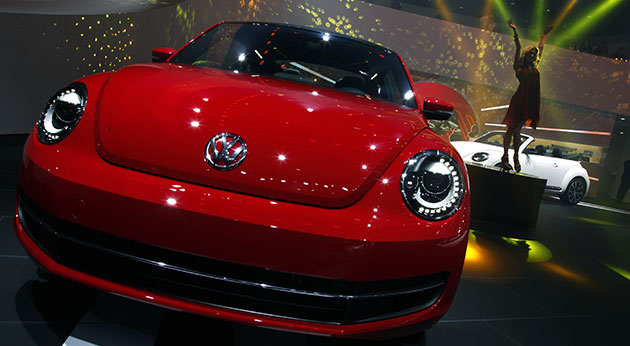 On Friday I saw a bunch of headlines about Volkswagen facing possibly huge fines for violating EPA rules. There have been a lot of headlines like this recently, so I sort of shrugged and moved on.

It wasn’t until yesterday that I actually read a couple of the stories and realized what Volkswagen had actually done. Once I did, words failed me. So let’s just hand the mike to Mark Kleiman:

The story reads like the most paranoid anti-corporate fantasy, until you get to the line where the firm admits what it did….In the VW case, code was written into the engine-control software to detect the pattern of pedal and steering operations characteristic of an emissions test. Then, and only then, the car’s emissions-control machinery would kick in. Once the test was over, the software noticed that, too, and returned to normal — that is to say, illegally and dangerously dirty — operations, at about 40x the permitted — and advertised — level of nitrous oxide emissions.

Now just think about the depth of corporate depravity involved. This wasn’t one rogue engineer or engineering group at work. People up and down the chain had to be party to the crime. And note that the conspiracy held together for six years, and was finally broken not by an internal leak but by the work of outside scientists at the University of West Virginia.

In a nutshell: A whole range of VW and Audi “clean diesel” models were spewing immense amounts of nitrogen oxides—a precursor to ozone formation—into the air we breathe. But if you took one of these cars in for a smog check, its engine-control software temporarily put it into a special mode that would pass the test. As soon as the test was over, the engine returned to its smog-spewing ways.

This goes far beyond most safety issues with cars. Whether we like it or not, car manufacturers always face tradeoffs between cost and safety. Having those conversations is a normal part of engineering life. Even in infamous case like the Pinto gas tank, what you have is a normal conversation that went way overboard. As bad as it is, it’s understandable that stuff like this happens occasionally.

But that’s not what this is. There was no cost involved. In fact, writing the code to do this cost Volkswagen money. Nor was it something that took place just among a small group of product managers with bad incentives. This was coldly premeditated. It required substantial testing to make it work right. It happened across not just different models, but across two different nameplates. It lasted for six years until it was discovered. And it was done not as a tradeoff of some kind, but solely to make the car peppier during test drives so that VW could sell more diesel models.

How far up does this go? It’s hard to believe it doesn’t go up pretty far. And it must have left behind a significant paper trail. So what’s next? Given the calculated nature of the crime, and the fact that it almost certainly killed people, Kleiman doesn’t think civil fines are enough:

When people conspire to commit a crime that harms the health of untold numbers of people, shouldn’t criminal charges at least be considered? And not only against the company, but against every official in it who can be shown to have known about the conspiracy….The most horrible thing about this case is that very few if any of the people involved will have lost any sleep over their guilt in making sick people sicker (and killing some of them) and none will lose face among their friends and neighbors. Even if some are found guilty of felonies, life won’t be nearly as bad for them as it is for someone who gets caught committing burglary: someone whose contribution to human suffering can’t hold a candle to what the VW conspirators pulled off.

In Georgia, a CEO is about to go to jail for a long time—maybe for life—because he approved the sale of tainted peanuts across state lines. The result was a nationwide salmonella outbreak that sickened hundreds and killed nine people. The CEO’s brother and a quality control manager at the plant also face prison time.

Did VW’s actions sicken hundreds and kill at least nine people? A quick swag suggests that VW emitted about 3,800 excess tons of nitrogen oxides in Southern California alone over the past six years, which may have caused as many as a dozen or more incremental deaths. If we can put a peanut CEO in prison for this, why not an auto CEO?

UPDATE: My original spreadsheet used an incorrect value for the EPA NOx standard. It’s been corrected now. The death rate is probably a bit higher than my original estimate, though the error bars are big enough that it doesn’t change the final result much.