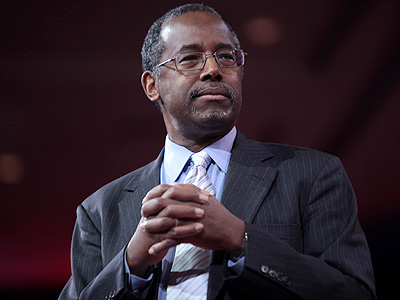 Courtesy of Gideon Resnick at the Daily Beast, here’s a fascinating timeline of Ben Carson talking about his prostate cancer, which was diagnosed in mid-2002 and surgically removed in August 2002.

CARSON: What we eat, how we treat our bodies, what we do to strengthen or to weaken our immune systems. We need to pay a lot more attention to preventive medicine—not so much to radiating, poisoning and cutting.

TERRY MEEUWSEN: Has going through what you’ve just gone through and sensing the truth of what you just talked about, has that changed the way that you live?

CARSON: Oh absolutely. I have changed my diet significantly.

Carson believes there is cause for great concern. “There certainly seems to be some dietary connection to cancer rates….And clearly there are environmental issues. Pesticides, water contamination, the list goes on and on.”…Carson changed his diet to include mostly organic fruits and vegetables.

2003 or early 2004: Carson is booked to speak at the annual sales conference of Mannatech Inc., a multilevel marketer of glyconutrient supplements.

The father of one of Dr. Carson’s patients told him about a ten year-old company based in Coppell, Texas which had secured world-wide patent rights to a food supplement known as a glyconutrient….Dr. Carson then contacted Dr. Reg McDaniel, an authority in glyconutrients and medical director of Manna Relief Inc….“The science made sense to me,” Dr. Carson said. “God gave us (in plants) what we need to remain healthy,” he said. “In today’s world our food chain is depleted of nutrients and our environment has helped destroy what God gave us.”

One of the fathers of one of my patients asked me if I had ever heard anything about glyconutrients. And I said, well, I’ve certainly heard the term, but I didn’t know anything specific about them. He gave me the website, and I subsequently contacted Dr. Reg [Reginald McDaniel, medical director of Mannatech], and we had quite a conversation about….possibilities. And he sent me some product and prescribed a regimen. And I started taking the product, and within about three weeks my symptoms went away.

August 2004, in a Mannatech press release

….According to investigators, the defendants encourage product user testimonials that tout their supplements’ alleged healing effects. These exaggerated testimonials, along with misleading before and after photos, are displayed prominently in seminar booths, brochures, videos, sales associates’ personal Web sites and training materials. Together, these marketing techniques mislead consumers into believing that the supplements dramatically cure or treat serious illnesses.

….In fact, the company’s health claims are not supported by legitimate scientific studies, nor are its products approved as drugs by the U.S. Food and Drug Administration.

Faith leads many to Mannatech, and that faith, combined with desperation and lack of tools to judge the claims of the company and its associates, can be a powerful basis for glyconutrient sales….We feel that glycobiologists do have a responsibility to serve the public by speaking out against claims of glyconutrient therapeutic efficacy, often based on legitimate glycobiology discoveries, when there is a lack of credible clinical data to support such claims.

He got a round of applause by telling Mannatech associates that the company had donated funds to help him get a coveted endowed post at Johns Hopkins Medicine, according to a video of the event.

Despite the fact that this was a prepared address at a Mannatech conference, his campaign now says he “simply got things mixed up” and Mannatech never provided any funding for his endowed chair.

Fascinating, no? In 2002 and 2003 Carson talks repeatedly about diet and immune system issues, but for some reason fails to mention glyconutrients. Then he signs up to speak at Mannatech’s 2004 sales conference. Almost immediately, he starts mentioning glyconutrients and claims he began taking them within weeks of his cancer diagnosis. Mannatech’s sales soar after Carson’s implicit endorsement. Three years later Mannatech is sued by the Texas attorney general for making unproven health claims, and scientists call Mannatech’s work a “sham.” Nevertheless, Carson continues his association with Mannatech: apparently accepting funding from them for an endowed chair; speaking at their sales conference in 2011 and 2013; appearing in promotional materials on their website; and appearing in a PBS special touting glyconutrients.

May 2015: Carson announces he will run for president.

In a Republican debate, Carson flatly says he has no association with the company:

“I didn’t have an involvement with them. That is total propaganda, and this is what happens in our society. Total propaganda. I did a couple of speeches for them, I do speeches for other people. They were paid speeches. It is absolutely absurd to say that I had any kind of a relationship with them.”

And that brings us up to date.