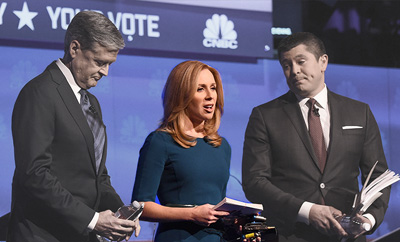 CNBC’s Becky Quick has come in for some criticism for being unprepared during Wednesday’s debate. To refresh your memory, here’s what happened during an exchange with Donald Trump:

QUICK: You had talked a little bit about Marco Rubio. I think you called him “Mark Zuckerberg’s personal senator” because he was in favor of the H1B.

In fact, Trump had said that in his own immigration plan. Why didn’t Quick know this?

I think we all know what happened here. Someone on Quick’s staff prepared some notes that included the quote, but didn’t specify where it came from. So when Trump denied saying it, Quick was stuck.

Now, sure, the staffwork here was bad, and Quick should have been better prepared. But that’s not the real problem here. The real problem is that Quick was unprepared for bald-faced lying. She expected Trump to spin or tap dance or try to explain away what he said. She didn’t expect him to just flatly deny ever saying it. That’s the only circumstance that would require her to know exactly where the quote came from.

This was a real epidemic on Wednesday night. Candidates have apparently figured out that they don’t need to tap dance. They can just baldly lie. Trump did it. Rubio did it. Carson did it. Fiorina did it. They know that time is short and they probably won’t get called on it. The worst that will happen is that fact checkers will correct them in the morning, but only a tiny fraction of the viewing audience will ever see it. So what’s the downside of lying?