I routinely mock the tiresomely predictable calls from conservative hawks to “arm the opposition.” It never seems to matter who the opposition is. Nor does it matter if we’re already arming them. If we are, then we need to send them even better arms. Does this do any good? Can allied forces always 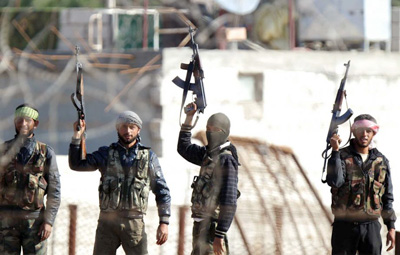 benefit from more American arms and training? That gets tactfully left unsaid.

Today, Phil Carter, who has firsthand experience with this, writes a longer piece explaining just why the theory of indirect military assistance is so wobbly in practice:

The theory briefs well as a way to achieve U.S. goals without great expenditure of U.S. blood and treasure. Unfortunately, decades of experience (including the current messes in Iraq and Syria) suggest that the theory works only in incredibly narrow situations in which states need just a little assistance. In the most unstable places and in the largest conflagrations, where we tend to feel the greatest urge to do something, the strategy crumbles.

It fails first and most basically because it hinges upon an alignment of interests that rarely exists between Washington and its proxies.

….Second, the security-assistance strategy gives too much weight to the efficacy of U.S. war-fighting systems and capabilities….For security assistance to have any chance, it must build on existing institutions, adding something that fits within or atop a partner’s forces….But giving night-vision goggles and F-16 aircraft to a third-rate military like the Iraqi army won’t produce a first-rate force, let alone instill the will to fight.

….The third problem with security assistance is that it risks further destabilizing already unstable situations and actually countering U.S. interests. As in Syria, we may train soldiers who end up fighting for the other side or provide equipment that eventually falls into enemy hands.

There are some things we should have learned over the past couple of decades, and one of them is this: “train-and-equip” missions usually don’t work. Sometimes they do, as in Afghanistan in the 80s. But that’s the rare success. In Iraq, Syria, Libya, and Afghanistan in the aughts, they failed.

So why do we hear cries to arm our allies during practically every conflict? Because it turns out there aren’t very many good choices in between doing nothing and launching a full-scale ground war. One option is aerial support and bombing. Another option is arming someone else’s troops. So if you know the public won’t support an invasion with US troops, but you still want to show that you’re more hawkish than whoever’s in charge now, your only real alternative is to call for one or the other of these things—or both—regardless of whether they’ll work.

And of course, the louder the better. It might not help the war effort any, but it sure will help your next reelection campaign.