Sarah Kliff points today to a new paper that investigates the effect of high-deductible health plans. In theory, since these plans require people to spend more of their own money, it should motivate them to 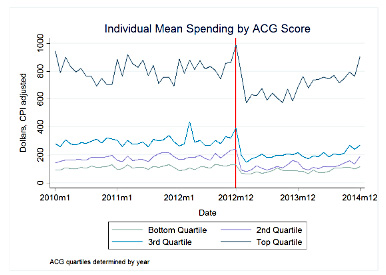 shop around for better prices. But that’s not how things turned out.

The chart on the right shows what happened when a large firm forced all of its employees to switch from an insurance plan that provided free health care to a high-deductible plan. At first, spending on medical care dropped sharply. Over the next two years, however, it rose back nearly to its previous level. (Note: ACG is a predictive measure of sickness.) The switch to the HDP plan apparently caused a short-term shock, but over the longer term people needed whatever health care they needed. They might not have liked it, but they paid the higher prices.

Still, they did spend less for a while. But how much of that came from shopping for lower prices vs. simply consuming less health care? The firm provided employees with a price-comparison tool, which made it fairly easy to shop for better prices, but apparently it went virtually unused. The best evidence of this comes from spending on imaging services like X-rays and MRIs. These are commodity services, and patients aren’t likely to use a higher-priced service simply because they don’t want to switch doctors. An X-ray is an X-ray.

But as the table below shows, price shopping accounted for barely any of the decrease in spending. Even for X-rays, most patients apparently just went wherever their doctors told them to go without shopping around at all. The researchers conclude:

Consumers did not shift to cheaper providers, either immediately in the first year post-switch or afterwards in the second year….Price shopping is not an important component of the spending reductions resulting from the switch to high-deductible care.

It’s possible, of course, that two years isn’t a long enough study period. Price shopping for medical care isn’t common, and it was especially uncommon at this firm, which had previously provided completely free health care. As usual then, more study is needed. But this is a pessimistic result for those who think that forcing consumers to pay for health care with their own money will motivate them to shop for better prices. It doesn’t seem to. Sarah Kliff has much more discussion of what this means at the link.