“I don’t have a lot of good things to say about the Obama administration’s Syria policy,” says Dan Drezner. He links to Adam Elkus, who calls Obama’s Syria strategy “semi-competent.” At the BBC, Tara McKelvey writes about Robert Ford, former US ambassador to Syria, who was close to the Syrian opposition and wanted to arm them when the Assad regime started to crumble. “People in the intelligence community said the time to arm the rebels was 2012,” she writes. The problem is that officials in Washington were unsure that Ford really knew the opposition well 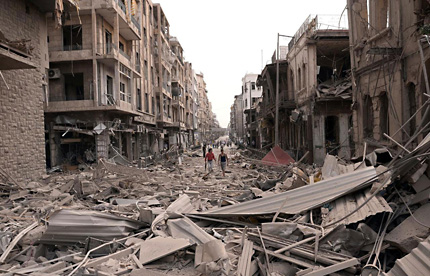 enough. “Most of the rebels, he said, weren’t ‘ideologically pure’, not in the way US officials wanted. ‘In wars like that, there is no black and white,’ he said.”

I’ll agree on a few counts of the indictment against Obama. Now that the mission to arm the rebels has failed, he says he was never really for it in the first place. That’s cringeworthy. The buck stops with him, and once he approved the plan, hesitantly or not, it was his plan. He should take responsibility for its failure. You can also probably make a case that we should have done more to arm the Kurds, who have shown considerable competence fighting both ISIS and Assad.

But those are relative nits, and I’d be curious to hear more from Drezner about this. He basically agrees that arming rebels hasn’t worked well in the Middle East, and there’s little chance it would have worked well in Syria. “There is a strong and bipartisan 21st-century record of U.S. administrations applying military force in the Middle East with the most noble of intentions,” he says, “and then making the extant situation much, much worse.” He also agrees that Obama’s big-picture view of Syria is correct. “The president has determined that Syria is not a core American interest and therefore does not warrant greater investments of American resources. It’s a cold, calculating, semi-competent strategy. But it has the virtue of being better than the suggested hawkish alternatives.” He agrees that those “hawkish alternatives” are basically nuts.

So why exactly is Obama’s record in Syria “semi-competent”? Why does Drezner not have much good to say about it? My only serious criticism is that Obama did too much: he never should have talked about red lines and he never should have agreed to arm and train the opposition at all. But given the real-world pressures on him, it’s impressive that he’s managed to restrict American intervention as much as he has. I doubt anyone else could have done better.

There is something genuinely baffling about American hawks who have presided over failure after failure but are always certain that next time will be different. But why? If anything, Syria is more tangled and chaotic than Iraq, Yemen, Libya, Afghanistan, or any of the other Middle Eastern countries we’ve gotten involved in since 2001. What kind of dreamy naivete—or willful blindness—does it take to think that we could intervene successfully there?

Anyway, that’s my question. Given the real world constraints, and grading on a real-world curve, what has Obama done wrong in Syria?