Needless to say, climate change isn’t the only culprit. Changing land use patterns are also at fault, as is a century long habit of “fire exclusion,” in which fires aren’t allowed to burn normally. This causes dry underbrush to build up, 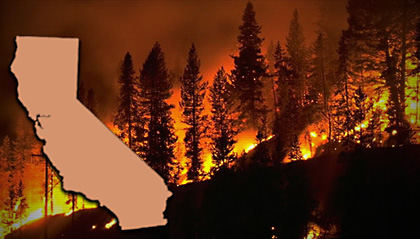 producing huge amounts of tinder whenever a fire starts. Still, climate plays a significant role too.

But the LA Times, once again, has devoted a long article today to debunking this. “Scientists who study climate change and fire behavior say their work does not show a link between this year’s wildfires and global warming,” writes Paige St. John. But this is a cop-out. It’s true—banal but true—that wildfire activity in any particular year can’t be conclusively blamed on climate change. It’s also true that there are other factors that have contributed to bigger fires in recent years. But a warmer climate is almost certainly to blame as well. As far back as 2006, a metastudy in Science concluded that climate change did in fact play a role in increased wildfire activity in California and throughout the West:

….The greatest absolute increase in large wildfires occurred in Northern Rockies forests….fire exclusion has had little impact on natural fire regimes….an advance in spring produces a relatively large percentage increase in cumulative moisture deficit by midsummer. In contrast, changes in Northern California forests may involve both climate and land-use effects. In these forests, large percentage changes in moisture deficits were strongly associated with advances in the timing of spring….Southwest forests….fire exclusion has had the greatest effect on fire risks….less affected by changes in the timing of spring.

….Broad-scale increase in wildfire frequency across the western United States has been driven primarily by sensitivity of fire regimes to recent changes in climate over a relatively large area.

The Times piece is very strange. It starts by quoting Roger Pielke, the go-to guy for any reporter who wants a skeptical take on climate change. But even Pielke doesn’t actually say climate is unrelated to increased wildfire activity. Next up is a quote from a guy concerned with fire risk who naturally thinks we should focus on making homes safer, but doesn’t comment on climate science one way or the other. Next comes a scientist who has “concluded that global warming has indeed shown itself in California.” Then a Forest Service ecologist who says “California has had an average of 18 additional days per year that are conducive to fire.”

Next comes a UCI team who reported that climate change will increase fires in Southern California by 64 percent over the next few decades. But instead of simply reporting that, the piece acknowledges only that fires will “increase,” and then casts doubt on the result by noting that the UCI model has error bars which indicate that the increase could be between 12 percent and 140 percent. Then a prediction from a “UC Merced expert” who speculated about “a possible decrease of such fires as dry conditions slow vegetation growth.” Finally a National Park Service climate change scientist is quoted as saying “We are living right now with a legacy of unnatural fire suppression of approximately a century.” That’s true enough. Elsewhere, however, that same scientist has also said, “climate has dominated all factors in controlling the extent of wildfire in Western U.S. forests in the 20th century.”

In other words, virtually everyone quoted in this article either (a) says nothing about climate change or (b) says climate change is an important factor in the rise of wildfires in California and the West. And yet, somehow all of this is written in a way that makes it sound as if climate change has nothing to do with wildfires, and it’s topped by a headline that says in no uncertain terms, “Gov. Brown’s link between climate change and wildfires is unsupported, fire experts say.”