We all know that John Boehner quit the speakership because he was finally fed up trying to deal with the lunatics in his own party. But how about some of the tea party darlings, like Trey Gowdy or Paul Ryan? Apparently they feel about the same:

[Gowdy] insists he’s not interested in joining leadership, not in any capacity. He is funny, and biting, about the chaos of the present House.

“I don’t have a background in mental health, so I wouldn’t have the right qualifications to lead right now,” he says. Who wants you to be in leadership? “No friend does,” he says.

….“To me, just speaking as one member, the smartest kid in the class is Paul Ryan,” Gowdy said. “If I had one draft choice and I was starting a new country, I would draft Paul to run it. Not because I agree with him on everything, but because 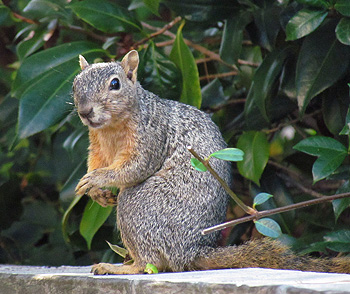 By coincidence, this is sort of related to the conservative fantasy I talked about in the previous post. Folks like Gowdy and Ryan are smart enough to see it too, even though they’re both stone conservatives themselves. A leadership role wouldn’t give them the power to actually implement the conservative agenda, but too many conservatives these days don’t care. They’re living the fantasy that if only their leaders fought hard enough, they could win. So when they don’t win, it must mean that they didn’t fight very hard. Right now, there’s just no way to puncture that fantasy.

And why the squirrel illustration? Nothing to do with Gowdy or Ryan or the tea party or conservatives being squirrely or nuts. Honest! This is just our household squirrel, who was outside feeding his face a few minutes ago. So I went out and took his picture. And speaking of squirrels, here’s an interesting squirrel factlet: if you Google “squirrel saying,” 7 of the top 20 hits are about the difficulties that German speakers have saying “squirrel.”