Dave Roberts is unhappy with the fact that we struggle to make new friends after college:

I read a study many years ago that I have thought about many times since, though hours of effort have failed to track it down. The gist was this: The key ingredient for the formation of friendships is repeated spontaneous contact. That’s why we make friends in college: because we are, by virtue of where we live and our daily activities, forced into regular contact with the same people. It is the natural soil out of which friendship grows.

….But when we marry and start a family, we are pushed, by custom, policy, and expectation, to move into our own houses. And when we have kids, we find ourselves tied to those houses. Many if not most neighborhoods these days are not safe for unsupervised kid frolicking. In lower-income areas there are no sidewalks; in higher-income areas there are wide streets abutted by large garages. In both cases, the neighborhoods 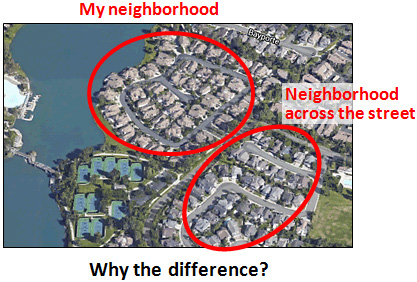 are made for cars, not kids. So kids stay inside playing Xbox, and families don’t leave except to drive somewhere.

This is a common critique, but I don’t think it holds water. For starters, read The Organization Man. As William Whyte reports, spontaneous new friendships were quite common in 1950s suburbia—which was architecturally quite similar to today’s suburbia. This was certainly true of my stucco tract house neighborhood when I was growing up. Second, New Urbanists have been trying for a long time to create communities that encourage spontaneous friendships, and they routinely fail. Build houses with stoops, and everyone stays inside anyway.

Or take my current suburban neighborhood. It’s pretty typical. Everyone is friendly, and we know our near neighbors. Some close friendships have developed, but that’s about it. Across the street there’s a nearly identical neighborhood, but this one is far more close-knit, throwing Halloween parties and July 4th bashes and just generally socializing in a way that mine doesn’t. Why?

I’m not entirely convinced that the nature of friendships has actually changed all that much during the past few centuries of civilization. Some people are sociable and some aren’t. But if I’m wrong, I still don’t think it’s primarily because of changes in the built environment. Maybe it’s due to the fact that women don’t routinely stay home during the day and socialize with neighbors. Maybe it’s because of air conditioning and TV. Maybe we all figured out that picking friends by random location (i.e., living next door) didn’t make much sense once we had other options. Or maybe it’s just that smart verbal types tend to be a little introverted, and we hear from them more often than anyone else.

And stop blaming graduation from college! Half the country never went to college, but I’ll bet they have as many (or more) friends than the rest of us. How do they manage that if they skipped college and live in the same kinds of places as us overeducated types?

Anyway, consider this is a challenge. Do modern Americans really have fewer close friends than in the past? Establish that before you go any further. If it turns out to be true, why? I don’t think the evidence really supports the idea that it’s mostly due to the nature of suburban living. (Do apartment dwellers have more friends than homeowners?) This becomes a much more interesting question when we get over our obsession with the evils of suburbia.