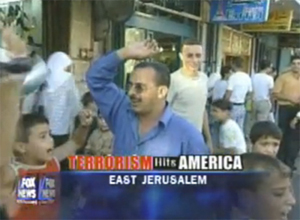 The latest from la-la land:

Republican presidential hopeful Ben Carson joined GOP rival Donald Trump in claiming that he, too, saw news footage of Muslim-Americans cheering as the World Trade Center towers fell on Sept. 11, 2001 — despite the fact that no such footage has turned up yet. “I saw the film of it, yes,” Carson told reporters at a Monday campaign event, adding that it was documented by “newsreels.”

Newsreels? What is this? 1943? But wait. We have breaking news via Twitter from Jon Karl of ABC News:

@RealBenCarson spox Doug Watts: Carson was mistaken when he said he saw film of Muslims celebrating on 9/11 in Jersey City….”He doesn’t stand behind his comments [on] New Jersey and American Muslims,” Watts told ABC’s @KFaulders….”He was rather thinking of the protests going on in the Middle East and some of the demonstrations” there on 9/11.

This is nuts. These guys are trying to put the Onion out of business for real. “We have investigated and discovered that East Jerusalem is not on the Hudson River after all.” But hell, at least Carson is willing to admit his error. One brownie point for that—though it does raise some questions about his vaunted memory. Trump will continue to insist forever that he saw it, and his supporters will continue to believe him because you can never trust the mainstream media, can you? They’re always covering up for Jersey City’s Muslim community.