Thirty-second television commercials were once signs of a confident, well-financed candidacy for the White House. Now they are seen as a last resort of struggling campaigns that have not mastered the art of attracting the free media coverage that has lifted the political fortunes of insurgent campaigns like those of Mr. Trump 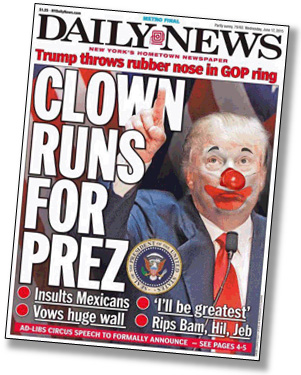 and Ben Carson, a retired neurosurgeon who has surged to the top of the polls.

….In addition to having done countless interviews, Mr. Trump has been effective in using social media to attack his rivals, and many of his acrid and controversial quips on Twitter are rebroadcast by traditional news media outlets.

“I think he’s found ways to gain print and airtime by being available and quotable,” said Mike Schreurs, the founder and chief executive of Strategic America, a marketing and advertising firm based in Iowa. “He’s probably a more sophisticated user of media than any other presidential candidate we’ve ever seen.”

Can we stop right here? Donald Trump’s “discovery,” if it can be called that, is that the American media is a sucker for anything outrageous. That’s it. They aren’t covering Trump because he’s Trump, they’re covering him because he says Mexicans are murderers and rapists and politicians are all losers and Carly Fiorina is ugly. Whatever other virtues and faults Jeb Bush has, he’s not willing to say stuff like that—so the media ignores him.

I’d like to see Parker do a follow-up piece that sheds the fiction of Trump somehow discovering a whole new strategy to get publicity. He hasn’t. It’s the same strategy he’s always had to get airtime on entertainment shows. The difference is that most presidential candidates in the past figured they had to act at least nominally presidential if they didn’t want to end up as ignored as Alan Keyes. But apparently the political media has changed. Reporters and editors are now as eager as any gossip show to cover obvious buffoonery, and both Trump and Ben Carson have ridden that wave.

Why? Is it just an artifact of struggling mainstream outlets that are desperate for something to pay the bills? Is it a sense that they have to compete with BuzzFeed and HuffPo? Forget Trump and Carson. Someone ought to write about changes in campaign reporting that have made the two of them possible.