The whole Republican bedwetting exercise over their allegedly heinous treatment at the hands of CNBC is certainly entertaining for those of us who aren’t Republicans. But Republicans themselves are now making it even more Survivor-like by splitting into two competing tribes: Team Letter and Team Buck Up. The former is outraged at CNBC and plans to write a stern letter to future debate sponsors. The latter thinks the whole thing is 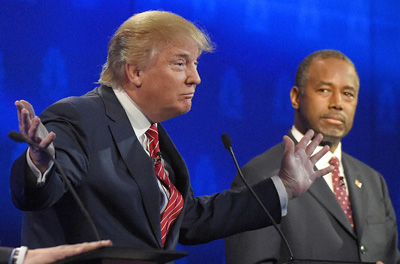 ridiculous. Anyone who wants to be president probably ought to be able to handle a few tough questions from John Harwood.

The whole debate debate is beginning to look like an effort spearheaded by the one candidate who probably has the most to lose from probing debate questions, current poll leader Ben Carson. As HuffPost’s Sam Stein reports, Team Carson would apparently prefer a “debate” made up basically of opening and closing statements.

Could be! In the long run, Carson may be the big loser from last week’s debate if this Mannatech stuff takes off. It’s in a bit of a lull right now, but my guess is that this is because a few of the big news outlets have assigned reporters to really dig into it, and it will take a couple of weeks for them to put together their pieces.

Elsewhere, Ezra Klein does what I just didn’t have the energy to do: compare the actual questions in the first four debates to see if CNBC was really “uniquely hostile.” Even Klein can only bring himself to analyze the first six questions, but here’s his conclusion:

The Fox News moderators were more aggressive in their questioning and more focused on creating conflict — but Fox News is inside the Republican Party to some degree, and its choice of targets, and its angles of attack, suggested it had the GOP’s best interests at heart. Similarly, CNN’s Republican debate was co-moderated by conservative radio host Hugh Hewitt, and so it was clear, again, that the tough questions were meant to strengthen the GOP, not weaken it.

As it happens, Ted Cruz’s critique of CNBC was precisely wrong. He lamented that the moderators weren’t asking substantive questions, when the questions, up till that point, were more substantive than those asked by any other network.

Yep. The CNBC debate had some problems, but it was about as substantive as any of the other debates. The big problem, I think, is that a focus on economic issues just begs for questions that expose the worst of the modern Republican Party. For example, at one point Trump was asked how he was going to save Social Security, and he blustered that he planned to create a “really dynamic economy.” Jeb Bush was almost plaintive in his reply: “The idea that you’re just gonna grow your way out of this — I have a plan to grow the economy at 4 percent, but you’re gonna have to make adjustments for both Medicare and Social Security.”

Bush himself started this whole thing with his absurd plan to grow the economy 4 percent per year, based on nothing in particular. But once he did that, he opened the box. Trump says he’ll grow the economy at 6 percent, and what’s Bush going to say? My absurd plan is realistic but your absurd plan is absurd? He can’t really do that, but it allows Trump to simply declare that no sacrifices at all are required because he’s going to turn the American economy into such a powerhouse. It’s frustrating for Bush (and for some of the others, notably John Kasich), but it’s the natural reductio ad absurdum of the Republican Party’s infatuation with magical economic theories.

Is it the CNBC hosts’ fault that these kinds of fissures got exposed over and over? No. It’s the fault of nonsensical plans with nothing to back them up. It would be derelict not to bring up this stuff.