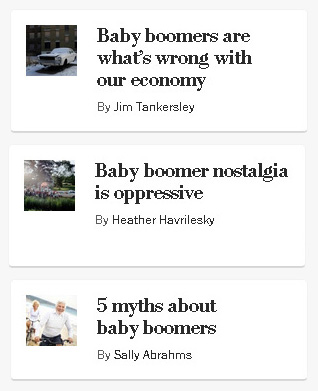 Over at the Washington Post, it’s time for some intergenerational griping. Jim Tankersley kicks things off with a piece blaming boomers for our economic woes. Really? Here’s an economic history of the past 70 years: The US economy boomed for about three decades after the end of World War II, but ever since the mid-70s productivity growth has slowed down. That’s pretty much it. It’s not the fault of any particular generation. (Also: Tankersley should replace about half of his references to “boomers” with “Republicans.” This would improve the accuracy of his piece considerably.)

Heather Havrilesky picks up the ball by blaming boomers for forcing our nostalgia on all the rest of you. Sure. I guess. I’m not quite sure how this makes boomers different from any other generation, but whatevs.

Finally, Sally Abrahms gamely tries to fight back, arguing that boomers aren’t really all that rich, or healthy, or selfish, or technophobic, or sterile.

(Technophobic? Where does that come from? We’re the generation of the IBM PC, the Apple II, the internet, and the Palm Pilot.1 Please.)

So with that in mind, let’s take a look at the highs and lows of the baby boomers. Then I’ll apologize:

Seems like a draw. Just like with every other generation. That goes for all you Greatest Generation folks too, who won World War II and then elected Joe McCarthy and Richard Nixon. We all have some stuff to answer for. So on behalf of boomers everywhere, I apologize for disco. Are you happy now?

1I was in a Microsoft store recently, and as long as I was there I asked about a problem I’d been having. The guy who helped me seemed knowledgeable enough, but was unable to diagnose my problem and rather blithely suggested I just blow everything away and reinstall Windows. I wasn’t too excited about this, and he gave me a look as if I were some pathetic oldster who just didn’t understand how easy it was. I felt like telling him that I bought my first Windows upgrade before he was born. (Windows 3.1. TrueType fonts!) Like military force, reinstalling Windows is a last resort, not a first option.

A day later I fixed the problem myself by deleting a directory and letting OneDrive start its initial sync from scratch.