One of the highlights of last night was watching the outsiders talk about foreign policy. Gerard Baker asked Ben Carson if he approved of President Obama’s decision to send special 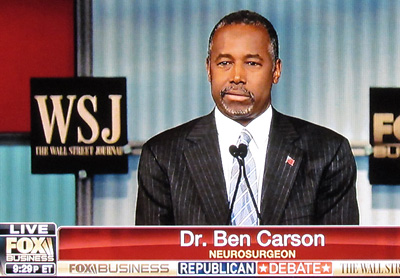 ops teams into Syria. Here’s his answer, in all its glory:

Well, putting the special ops people in there is better than not having them there, because they — that’s why they’re called special ops, they’re actually able to guide some of the other things that we’re doing there. And what we have to recognize is that Putin is trying to really spread his influence throughout the Middle East. This is going to be his base. And we have to oppose him there in an effective way.

We also must recognize that it’s a very complex place. You know, the Chinese are there, as well as the Russians, and you have all kinds of factions there. What we’ve been doing so far is very ineffective, but we can’t give up ground right there. But we have to look at this on a much more global scale. We’re talking about global jihadists. And their desire is to destroy us and to destroy our way of life. So we have to be saying, how do we make them look like losers? Because that’s the way that they’re able to gather a lot of influence.

And I think in order to make them look like losers, we have to destroy their caliphate. And you look for the easiest place to do that? It would be in Iraq. And if — outside of Anbar in Iraq, there’s a big energy field. Take that from them. Take all of that land from them. We could do that, I believe, fairly easily, I’ve learned from talking to several generals, and then you move on from there.

Translation: I have no idea what to do in the Middle East. And even though I’ve been running for president for a year, I’m too lazy to learn even the first thing about it.

Then there was Donald Trump’s even more gloriously ADD response to a question about how he’d handle Russia:

Well, first of all, it’s not only Russia. We have problems with North Korea where they actually have nuclear weapons. You know, nobody talks about it, we talk about Iran, and that’s one of the worst deals ever made. One of the worst contracts ever signed, ever, in anything, and it’s a 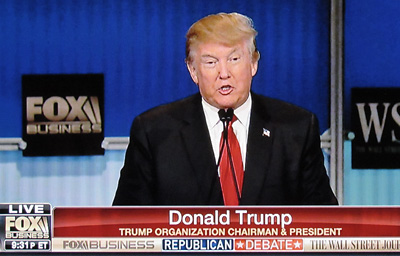 disgrace. But, we have somebody over there, a madman, who already has nuclear weapons we don’t talk about that. That’s a problem.

China is a problem, both economically in what they’re doing in the South China Sea, I mean, they are becoming a very, very major force. So, we have more than just Russia. But, as far as the Ukraine is concerned, and you could Syria — as far as Syria, I like — if Putin wants to go in, and I got to know him very well because we were both on 60 Minutes, we were stablemates, and we did very well that night. But, you know that.

But, if Putin wants to go and knock the hell out of ISIS, I am all for it, 100%, and I can’t understand how anybody would be against it….They blew up a Russian airplane. He cannot be in love with these people. He’s going in, and we can go in, and everybody should go in. As far as the Ukraine is concerned, we have a group of people, and a group of countries, including Germany — tremendous economic behemoth — why are we always doing the work?

I’m all for protecting Ukraine and working — but, we have countries that are surrounding the Ukraine that aren’t doing anything. They say, “Keep going, keep going, you dummies, keep going. Protect us…” And we have to get smart. We can’t continue to be the policeman of the world. We are $19 trillion dollars, we have a country that’s going to hell, we have an infrastructure that’s falling apart. Our roads, our bridges, our schools, our airports, and we have to start investing money in our country.

Translation: Russia! North Korea! Iran! Ukraine! Syria! ISIS! Germany! Ukraine again! Assad! Libya! Iraq! Oil! Keep the oil! But we should let other people handle all this because our roads are falling apart.

Republicans can’t seriously be thinking about nominating either of these guys, can they?