In 2012 the Tax Policy Center scored most of the Republican tax plans, but this year they’ve sat on the sidelines. I suppose this is partly because the plans generally don’t have enough detail to be seriously evaluated, and partly because they got tired of wasting time on tax plans 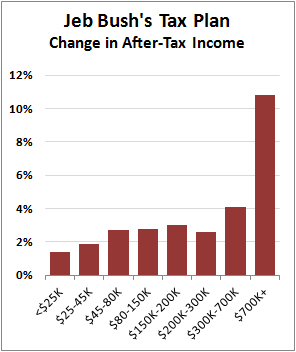 that are meant more as affinity statements than as actual financial documents. I mean, what’s the point of a bunch of guys with PhDs playing the role of pro wrestling referee in a tired game of “can you top this?”

For some reason, though, they’ve gone ahead and evaluated Jeb Bush’s tax plan. Their results are the usual ones from the party of fiscal prudence: Bush’s plan would increase the national debt from 78 percent of GDP to 106 percent within ten years; it would increase the federal deficit by about a trillion dollars; and it would benefit the rich far more than the poor. In other words, it’s the same as every other Republican tax plan. A few of the details change a bit from candidate to candidate, as do the specific numbers, but that’s about all

So does this matter? I go back and forth on this. Dylan Matthews says it does because the other campaigns haven’t provided enough detail for TPC to complete an analysis of their plans:

In the worst case, in which TPC never gets the details it needs for Rubio and Trump’s plans (or Ted Cruz’s very different plan), the Bush analysis becomes hugely valuable. It gives us a glimpse of what Rubio and Trump’s TPC scores would look like. It indicates that the plans are likely to be very, very expensive, with benefits concentrated at the top.

I don’t buy this. Everyone who’s not a paid shill for the Republican Party already knows it. The only difference is that reporters now have a well-respected analysis they can use to badger the Bush campaign, but they don’t have one for the others. So Bush will get more heat and the others will benefit from being smart enough not to cooperate with TPC.

Beyond that, does anyone care about these plans anymore? They’ve gotten so ridiculous that it’s hard to believe that even the candidates still take them seriously, let alone anyone else. They’re basically just a highly ritualized way of indicating that candidates subscribe to the approved catechism. The message is “I hate taxes, especially on the wealthy,” and the details are unimportant. As long as your tax cut is sufficiently large, you’re in.

TPC says they’d like to evaluate other tax plans, but I’d suggest they not bother. It’s a kabuki show long past its prime, and they must have better things to spend their time on.