A friend draws my attention today to a piece by National Review editor Rich Lowry about—of course—the wild popularity of Donald Trump among tea partiers. Lowry waxes nostalgic for the early tea party days of 2010, when being a “constitutional conservative” was all the rage, and wonders where it all went:

Trump exists in a plane where there isn’t a Congress or a Constitution. There are no trade-offs or limits….He would deport the American-born children of illegal immigrants. He has mused about shutting down mosques and creating a database of Muslims. He praised FDR’s internment of Japanese-Americans in World War II.

You can be forgiven for thinking that in Trump’s world, constitutional niceties—indeed any constraints whatsoever—are for 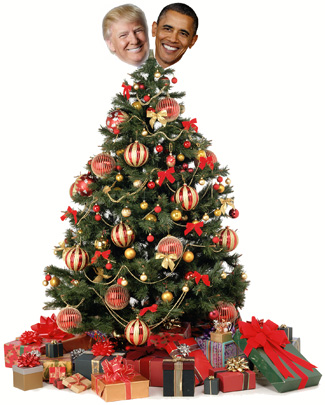 losers….For some on the right, clearly, the Constitution was an instrument rather than a principle. It was a means to stop Obama, and has been found lacking.

My friend snickers at Lowry’s use of some, which does a whole lot of heavy lifting here. Technically, though, 95 percent is still some, so this is accurate. But a wee bit misleading, no? Anyway, this leads Lowry into an argument that, really, Trump is just Obama 2.0:

Trump is a reaction to Obama’s weakness but also to his exaggerated view of executive power….Whereas Obama has a cool contempt for his political opponents and for limits on his power, Trump has a burning contempt for them. The affect is different; the attitude is the same.

….A hallmark of Obama’s governance has been to say that he lacks the power to act unilaterally on a given issue, and then do it anyway. Progressives have been perfectly willing to bless Obama’s post-constitutional government. Trump’s implicit promise is to respond in kind, and his supporters think it’s about time.

Uh huh. So far, Obama has done OK in the Supreme Court, but no matter. Tea partiers believe Obama goes to sleep each night not by counting sheep, but by counting bonfires of Constitutions. Or, as Lowry admits, they pretend to believe this. In reality, it’s just a handy way to oppose Obama’s liberal policies.

Now, it’s never been clear to me why you need this kind of charade. Why not just oppose Obama’s liberal policies because they’re no good? I suppose it’s mainly a palliative for the rubes, who don’t like to think of themselves as meanspirited folks who dislike paying taxes to help the less fortunate. Instead, they can complain that Obama’s policies are unconstitutional; or that he’s running up dangerous levels of debt; or that he’s turning America into sclerotic old Europe. That sounds a lot nicer.

Anyway, Lowry’s actual goal in this piece is to come up with conservative arguments against Trump. That’s the Lord’s work, even if “Obama 2.0” seems a little unlikely to catch on. What’s more, I seem to recall that he’s a cat person in an office jampacked with dog people. And Christmas is right around the corner. So I’ll call a truce. No more writing about Donald Trump until Christmas is over. We all deserve a break.