Could racial prejudice also affect attitudes toward paying college athletes? There are good reasons to believe that it could.

….To find out whether racial prejudice influences white opinion on paying college athletes, we conducted a survey of opinions on “pay for play” policies using the 2014 CCES. In a statistical analysis that controlled for a host of other influences, we found this: Negative racial views about 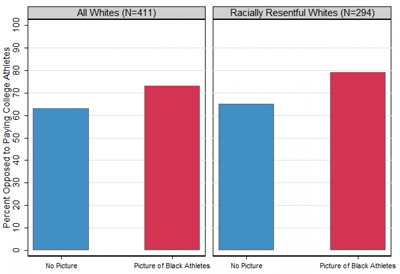 blacks were the single most important predictor of white opposition to paying college athletes.

….To check our findings’ validity, we also conducted an experiment. Before we asked white respondents whether college athletes should be paid, we showed one group pictures of young black men with stereotypical African American first and last names. We showed another group no pictures at all. As you can see in the figure [on the right], whites who were primed by seeing pictures of young black men were significantly more likely to say they opposed paying college athletes. Support dropped most dramatically among whites who expressed the most resent towards blacks as a group.

Apparently this gap is also visible in ordinary poll results: “In every survey to date, blacks are far more likely to support paying college athletes when compared to whites. For instance, in the 2014 Cooperative Congressional Election Study, 53 percent of African Americans backed paying college athletes–more than doubling the support expressed by whites (22 percent).”

I’m basically willing to believe that race and racial animus permeate practically everything of significance in America. But I wouldn’t have guessed this. I’m not sure why, but it just never occurred to me to think of big-time college sports as a “black thing,” even though it obviously is. It just goes to show how deeply our racial sickness infests us.