Today brings a new IOP poll of 18-29 year-olds. So what’s on the minds of our nation’s youth?

Well, among Democrats they prefer Bernie Sanders to Hillary Clinton. Among Republicans, they like Donald Trump and Ben Carson. Young whites like the idea of building Trump’s wall. Young Hispanics don’t. A disheartening 60 percent now support sending American ground troops to fight ISIS. And about two-thirds of Republicans think the American Dream is still alive for them.

Except for one subset of Republican voters: Trump supporters. This is who Trump appeals to: voters who think they’ve been screwed by the system and no longer have much faith in it. Maybe it’s because the Mexicans are taking away 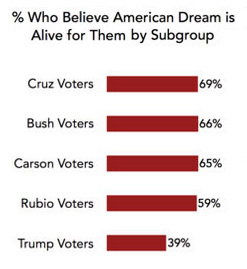 their jobs or because the fat cats are scooping it all up. But one way or another, they’ve lost faith in a better life and they think maybe Trump can give it back to them. For a sample of this, check out today’s LA Times story about Bruce Goacher, a Trump supporter from a decaying part of Davenport, Iowa:

On Saturday, Goacher shook the candidate’s hand at a Davenport campaign rally. He noticed the smooth texture of Trump’s palm. “He didn’t have to work as hard as I did with my callused hands,” said Goacher, 56. “If a man can become a billionaire without having to work that hard for it, he’s evidently a pretty smart man, money-wise, and the United States has to be run as a business.”

….As for Trump’s agenda, Goacher likes it all, starting with immigration…. Goacher mentioned a local company that charges “8, 10 grand” to replace a roof. “OK, there’s a boatload of Mexicans come by, and you can get it done for 2 or 3 grand. They’re not from here. That’s hurting the businessperson that’s here.”

….Goacher sees some of himself in the former star of “The Apprentice.” When repossessing a car, it’s best to dodge contact with the owner, Goacher explained. But when it’s unavoidable, the ability to size people up quickly is essential. “It’s either that or get screwed,” he said. “I can look at somebody, in 30 seconds of talking to them, I can tell you whether they’re a con … or they’re a pretty decent person.” Trump, he said, uses a similar talent on a grander scale. “He thinks a lot like me.”

It’s hard to parse this. Goacher thinks Trump is smart because he made a lot money without doing any manual labor. He doesn’t like cheap Mexican workers. And he somehow thinks that Trump is “a lot like me” because he can size people up quickly.

I don’t know if boatloads of Mexicans are putting up cheap roofing in Davenport, but the idea that Trump is especially smart or especially savvy is kind of nuts. Donald Trump thinks Donald Trump is smart and savvy, and he certainly says it often enough. His record, however, suggests just the opposite: he inherited a lot of money and has done a pretty average job of managing it. He knows how to needle people effectively, but otherwise his people skills seem pretty undistinguished. And his construction business is nothing special.

But he does have a big mouth. If you think the political system has failed you, I guess that’s enough.