Via the AP, here’s the latest on Hillary Clinton’s email woes:

The Obama administration confirmed for the first time Friday that Hillary Clinton’s unsecured home server contained some of the U.S. government’s most closely guarded secrets, censoring 22 emails with material demanding one of the highest levels of classification….The 37 pages include messages recently described by a key intelligence official as concerning so-called “special access programs” — a highly restricted 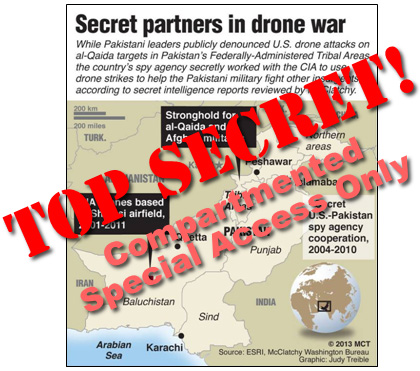 subset of classified material that could point to confidential sources or clandestine programs like drone strikes or government eavesdropping.

Special access programs are the most secret of all secrets, so this sounds bad. But wait. What’s this business about drone strikes? That’s not much of a secret, is it? Maybe you need a refresher on all this, so let’s rewind the Wayback Machine to last August, when we first heard about top secret emails on Clinton’s server that turned out to be about drone strikes:

The drone exchange, the officials said, begins with a copy of a news article about the CIA drone program that targets terrorists in Pakistan and elsewhere. While that program is technically top secret, it is well-known and often reported on….The copy makes reference to classified information, and a Clinton adviser follows up by dancing around a top secret in a way that could possibly be inferred as confirmation, the officials said.

Hmmm. A news article? Here’s a Politico piece from a couple of weeks ago, when we heard that the inspector general’s office was concerned about some of Clinton’s emails. Politico’s source is a “US official”:

The official, who spoke on condition of anonymity, said some or all of the emails deemed to implicate “special access programs” related to U.S. drone strikes….The information in the emails “was not obtained through a classified product, but is considered ‘per se’ classified” because it pertains to drones, the official added….The source noted that the intelligence community considers information about classified operations to be classified even if it appears in news reports or is apparent to eyewitnesses on the ground.

OK then: the emails in question discuss a news article containing information that’s widely-known but nonetheless top secret because…um, why not? Here’s more from Ken Dilanian, formerly of the AP and now with NBC News:

The classified material included in the latest batch of Hillary Clinton emails flagged by an internal watchdog involved discussions of CIA drone strikes, which are among the worst kept secrets in Washington, senior U.S. officials briefed on the matter tell NBC News. The officials say the emails included relatively “innocuous” conversations by State Department officials about the CIA drone program.

So what do you suppose the “closely guarded secrets” in the latest batch of 22 emails are? Drones? That’s a pretty good guess. Most likely, this all started with someone sending around a news article about the drone program in Pakistan or Yemen, and then several other people chiming in. It wasn’t classified at the time, and most likely contains nothing even remotely sensitive—but the CIA now insists on classifying it retroactively. That’s why Clinton’s spokesperson calls this “classification run amok” and says, once again, that they’ll seek to have all these emails released to the public.

Of course, this could just be a clever ruse on Clinton’s part, because she knows the emails will never see the light of day. But there are other people who have seen the emails. How have they reacted? Well, nobody on the Republican side has leaked or even “characterized” any of them, and nobody on the Democratic side has withdrawn their endorsement of Clinton. This suggests pretty strongly that this whole thing is, indeed, just a stupid bit of interagency squabbling.