Anne Case and Angus Deaton recently wrote a paper that’s gotten a lot of attention. One of the minor ways it’s gotten attention is in the way a lot of people talk about it: as the Deaton paper, or the Deaton/Case paper, despite the fact that it’s traditional in economics to list authors alphabetically.

Is this just because Angus Deaton recently won a Nobel prize? That probably didn’t hurt. But Justin Wolfers points today to a new working paper that suggests this is a widespread problem: when women coauthor papers in economics with men, it’s the men who get all the credit. The study is by Heather Sarsons, a PhD candidate at Harvard, who examined economics papers and tenure decisions at elite universities over the past 40 years. The chart on the right comes from her paper, and it shows the basic state of play. For men, it didn’t matter if they 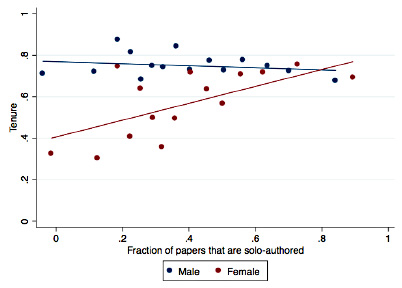 coauthored papers. They got tenure at about the same rate regardless of whether they coauthored or solo authored. For women, it mattered a lot. Solo authoring 80 percent of their papers doubled their chance of getting tenure compared to co-authoring most of their papers:

The coauthoring penalty is almost entirely driven from coauthoring with men. An additional coauthored paper with a man has zero marginal effect on tenure. Papers in which there is at least one other woman have a smaller effect on tenure for women than for men (8% vs. 3.5%) but still have a positive marginal impact.

Roughly speaking, Sarsons examines several possible explanations for this (maybe women are genuinely less qualified, maybe they pair up more often with senior people, etc.), and her conclusion is fairly simple: It’s none of that stuff. The ability of the female economists is, in fact, just as high as their male counterparts. Nevertheless, when women work in mixed-gender teams, people tend to think men did all of the actual work. Women get essentially no credit at all. The only way for them to get credit is to work on their own or with other women. This has broad implications:

Many occupations require group work. The tech industry, for example, prides itself on collaboration. In such male-dominated fields, however, group work in which a single output is produced could sustain the leaky pipeline if employers rely on stereotypes to attribute credit….Employers will rely primarily on their priors and women will be promoted at even lower rates. Bias, whether conscious or subconscious, can therefore have significant implications for the gender gap in promotion decisions.

Note to managers: be aware of this! Just because the guys who work for you are more aggressive about touting their work doesn’t mean they actually did more of it. Dig a little deeper and figure out who really did most of the work if you’re not sure. You might be surprised.