In the LA Times today, Maria Bustillos says she can’t support Hillary Clinton because of her vote for the Iraq War, her ties to Wall Street, her sellout “pragmatism,” and the fact that Henry Kissinger recently said complimentary things about her. “Those are words that should cause any real progressive of 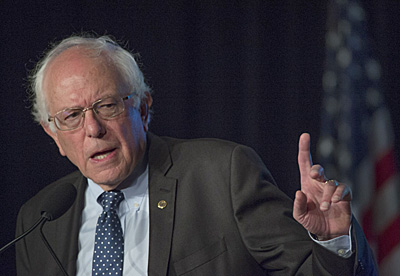 any gender to damn near have an aneurysm.” It’s hard to argue with that.

So far, no problem. Those are all good reasons to vote for Bernie. But what comes next is pretty disturbing:

Much as I support Sanders’ lifelong, rock-ribbed liberalism, I might have been persuaded to vote for a Democrat somewhat to the right of him in hopes of bringing some moderate Republicans along for the ride—especially in view of that party’s clown car primary. But none of those halfway-reasonable leftists ran: not Al Gore, not Russ Feingold, not Elizabeth Warren. And the very clownishness of that madly tootling Republican vehicle, I believe, virtually ensures that whichever Democrat secures the nomination will win the general.

I wonder how common this belief is? Not too common, I hope, because it’s wishful thinking in the extreme. Democrats have held the White House for eight years and the economy is in okay but not great shape. Those are not great fundamentals for a Democratic victory.

Now, it’s also true that demographic shifts are making the electorate steadily more Democratic. And candidate quality matters: If Republicans nominate a Donald Trump or a Ted Cruz, they’ll be shooting themselves in the foot. Nonetheless, every bit of history and political science modeling suggests that this will at least be a close election—and possibly one that favors Republicans at the start.

You should vote for whomever appeals to you. But if you’re operating under the delusion that Democrats can literally nominate anyone they want because nobody sane will vote for any of those crazy Republicans, you’d better think twice. This is a belief that betrays both a lazy liberal insularity about the nature of the electorate and an appalling amnesia about a political era that’s brought us Ronald Reagan, Newt Gingrich, Tom DeLay, Dick Cheney, Paul Ryan, and the entire tea party. This election is no runaway, folks.