Michigan senator Debbie Stabenow supports Hillary Clinton: “I think Bernie’s terrific as an advocate. There’s a difference between a strong community advocate and being someone who can get things done.” Martin Longman says this is an example of how nasty things are getting: “Breaking out the Sarah Palin talking points isn’t smart. Talk about how people view socialism all you want, but don’t dismiss community organizers or advocates. This isn’t a Republican campaign.”

I had to laugh at that. Nasty? I’d rate it about a 1 on the Atwater Scale. Toughen up, folks.

And speaking of this, it sure is hard to take seriously the gripes going back and forth between the Hillary and Bernie camps. Is it really the case that we can’t even agree on the following two points?

I mean, come on. They’re both lefties, but Sanders is further left. The opposing arguments from the Clinton camp are laughable. Clinton is more progressive because she can get more done? Sorry. That’s ridiculous. She and Bill Clinton have 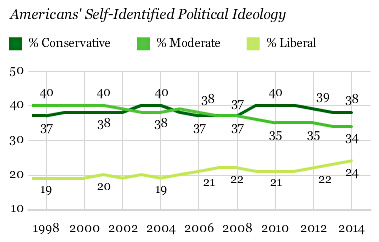 always been moderate liberals, both politically and temperamentally. We have over two decades of evidence for this.

As for electability, I admire Sanders’ argument that he can drive a bigger turnout, which is good for Democrats. But it’s special pleading. The guy cops to being a socialist. He’s the most liberal member of the Senate by quite a margin (Elizabeth Warren is the only senator who’s close). He’s already promised to raise middle-class taxes. He can’t be bothered to even pretend that he cares about national security issues, which are likely to play a big role in this year’s election. He wants to spend vast amounts of money on social programs. It’s certainly true that some of this stuff might appeal to people like me, but it’s equally true that there just aren’t a lot of voters like me. Liberals have been gaining ground over the past few years, but even now only 24 percent of Americans describe themselves that way. Republicans would tear Sanders to shreds with hardly an effort, and there’s no reason to think he’d be especially skilled at fending off their attacks.

I like both Sanders and Clinton. But let’s stop kidding ourselves about what they are and aren’t. Republicans won’t be be swayed by these fantasies, and neither will voters. We might as well all accept it.