The Republican members of the Senate Judiciary Committee have officially announced that they aren’t willing to even hold hearings for President Obama’s Supreme Court nominee—no matter who it is.1 Their letter includes all the usual argle bargle about needing to “protect the will of the American 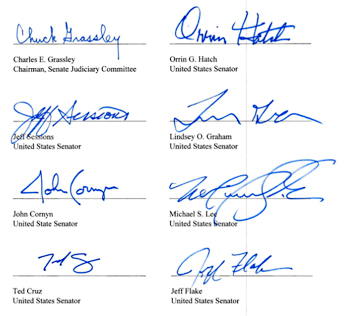 people” blah blah blah, but none of that matters. They’re doing this because they want to do it and they have the power to do it. I doubt that Democrats would act much differently under similar circumstances.

That said, you can add me to the huge crowd of observers who are puzzled by the political tactics here. The obvious question is: Why refuse to even hold hearings? That just makes Republicans look sullen and obstructionist. Why not hold hearings normally, drag them out a little bit, and then vote down whoever Obama nominates? The result is the same, but Republicans look more like senators and less like small children throwing a temper tantrum.

I suppose the answer is that this is a good way of firing up their base, and they think that’s more important than appealing to the center. Fair enough. But that raises another question: What’s the best way to fire up the Republican base? I’m not trying to troll anyone here, but it seems like the answer is to hold hearings. That would keep the whole Supreme Court issue front and center for months on end. The base would be faced almost daily with the prospect of what a liberal justice would do; talk radio would go nuts; and there would be endless chances to find specific problems with the nominee—many of which would coincidentally require the production of reams of files and records to trawl through.

Democrats, conversely, would have less to get fired up about. Sure, they’d be unhappy, but they wouldn’t be able to carp endlessly about Republican obstruction. Their guy is getting a hearing, after all.

So it seems like holding hearings normally would be a better way to fire up the GOP base and a better way to keep the Democratic base a little quieter. It probably wouldn’t make a huge difference either way, but it’s still a win-win. What am I missing here?

1After which they undoubtedly went out for a beer and shared their bewilderment about the fact that so many Republicans have been trained to vote for a guy like Donald Trump. What could possibly have driven them in such a direction?