The folks at the Screen Actors Guild sure do seem pleased with themselves:

[Idris] Elba…summed up the tone of the evening onstage with this play on words: “Welcome to diverse TV.”

The talk of the evening, onstage and behind the scenes, was the show’s strong display of inclusiveness….Laura Prepon…“This is what we talk about when we talk about diversity.”…Viola Davis…“They won because the actors have craft, they have a level of excellence that reaches people.”…Uzo Aduba…“It’s amazing to see actors have the opportunity to celebrate other actors’ work and to feel empowered by the voting process so they can see whatever actor they want reflected up there.”

….From the outset, the show made a point of presenting the diversity of its membership and nominees. The ceremony opened with several actors — Rami Malek, Queen Latifah, Jeffrey Tambor, Anna Chlumsky, Kunal Nayyar — talking 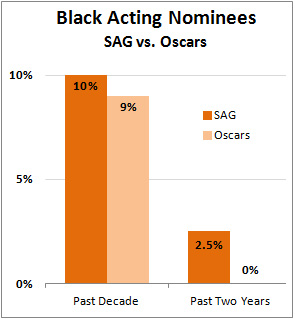 about what it means to be in their profession.

SAG Awards Committee Chair JoBeth Williams said the actor-focused awards show has “worked very hard to reflect the real world.” Williams noted its roster of presenters and nominees as proof of that.

OK, two things. First, these guys sound a lot less interested in diversity than in bragging about their nobility and getting in some digs at the Oscars. Second, I’d be a lot more impressed by their crowing if they had a better record of honoring black actors. The only reasonable comparison with the Academy Awards is in the solo film acting awards, and the chart on the right tells the story. In the past decade, 9 percent of all Oscar acting nominations have gone to black actors. For SAG, it’s a whopping 10 percent. In the past two years, there have been no black actors nominated for Oscars and a grand total of 1 for a SAG. The SAGs are doing better, but they probably shouldn’t sprain their arms patting themselves on the back for their performance.